WASHINGTON >> President Joe Biden and Prime Minister Fumio Kishida of Japan met Friday to discuss how to transform Japan into a potent military power to help counterbalance China and to bolster the alliance between the two nations so that it becomes the linchpin for their security interests in Asia.

“We’re modernizing our military alliance, building on Japan’s historic increase in defense spending and new national security strategy,” Biden said as the two leaders sat in the White House Oval Office in front of a fireplace with a roaring blaze. “Let me be crystal clear: The United States is fully, thoroughly, completely committed to the alliance.” 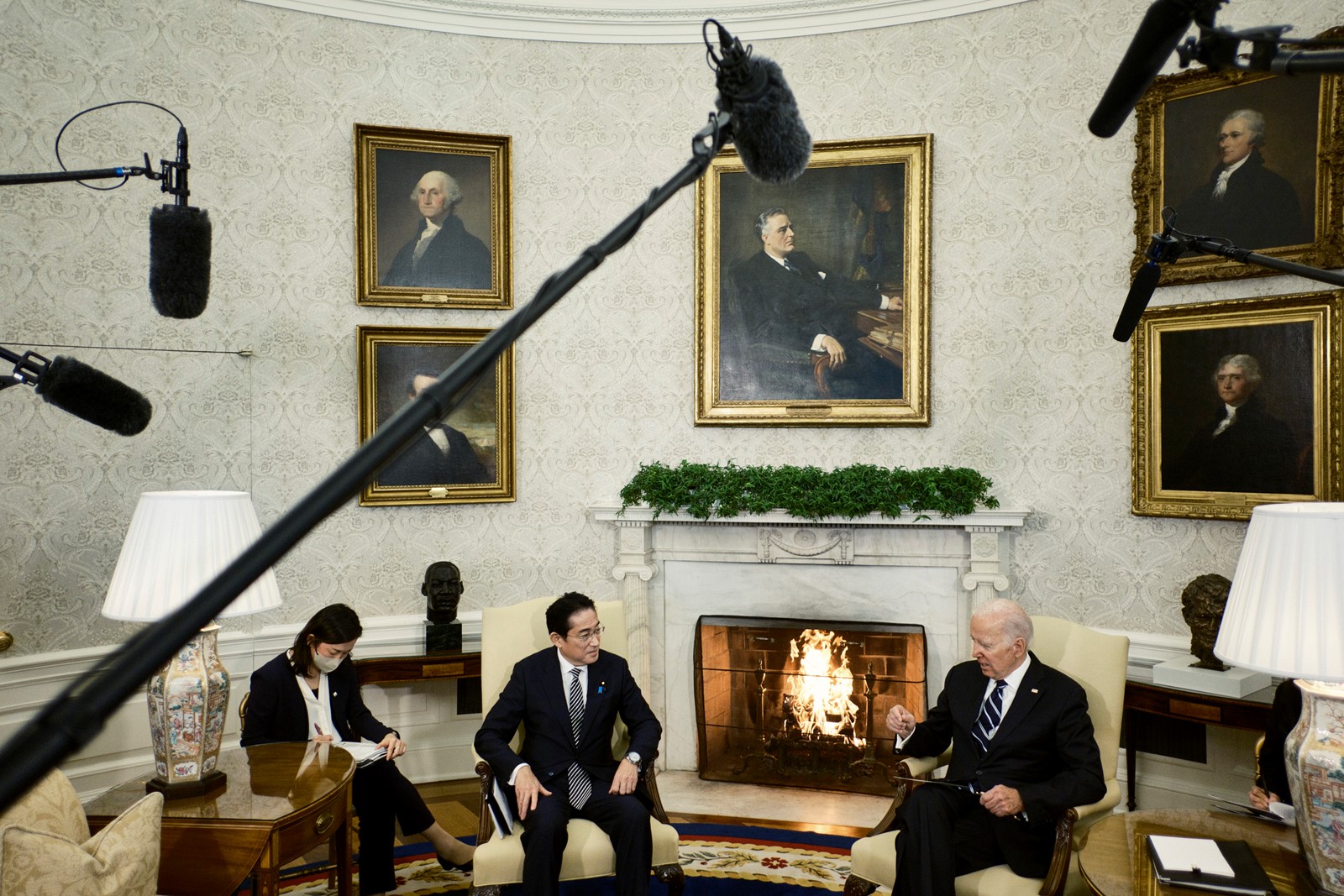 President Joe Biden and Japanese Prime Minister Kishida Fumio speak during a bilateral meeting in the Oval Office at the White House, in Washington on Friday. T.J. KIRKPATRICK — THE NEW YORK TIMES

Kishida was making his first trip to Washington since his election in October 2021 and one month after his government announced plans to strengthen its military capabilities and significantly increase military spending in the face of China’s rising power and repeated missile tests by North Korea.

Japan was infuriated by China’s lobbing of missiles around Taiwan in August, five of which landed in waters near Japan, the first time that had happened. And Japan is increasingly anxious over greater maritime activity by the Chinese military in the East China Sea and around the Senkaku Islands, which is disputed territory between the two governments.

“I believe that this will be beneficial for the deterrence capabilities and response capabilities of the alliance as well,” he said.

The two men did not mention China in their opening remarks, but a statement issued by their governments after the meeting highlighted growing challenges in the Asia region that ranged “from actions inconsistent with the rules-based international order by China to provocations by North Korea.”

But their concerns went far beyond Asia. The two governments raised the issue of instability in Europe and denounced Russia’s war on Ukraine. “We strongly oppose any unilateral attempts to change the status quo by force or coercion, anywhere in the world,” they said.

Before flying to Washington, Kishida had met with European, British and Canadian leaders in their countries and signed a defense agreement in London. He said in Tokyo before the global tour that he would stress the need for cooperation, given the world was “now in a severe security environment” and that “the global economy is also facing the possibility of downside risk.”

Biden greeted Kishida on the South Lawn of the White House before noon, shortly after Kishida finished breakfast with Vice President Kamala Harris at her residence at the U.S. Naval Observatory.

Besides military issues, Biden, Kishida and their aides discussed the close economic ties between the two nations and the challenges in maintaining secure global supply chains.  The security issues tied to commerce include technology trade with China, the world’s second-largest economy, and sanctions against Russia for its war on Ukraine. U.S. officials have been in talks with Japan and the Netherlands to try to get them to agree to ambitious export controls that would further limit the sale of semiconductor manufacturing technology to China.

The governments said in their joint statement that they would build on prior economic cooperation to “sharpen our shared edge on economic security, including protection and

promotion of critical and emerging technologies, including semiconductors.” They also promised to lead on clean energy efforts and work together on nuclear energy while upholding nonproliferation standards.

Biden has made the bolstering of alliances across Europe and Asia a cornerstone of his foreign policy, in contrast to the “America First” direction of his predecessor, Donald Trump. Biden sees the alliances as critical in the face of greater aggression by China and Russia, the main superpower rivals of the United States. He also views with growing urgency global issues such as the coronavirus pandemic, a food crisis, climate change and nuclear proliferation.

Biden has also stressed the importance of supporting democracies against internal and external threats, and he and his aides count Japan among the most important democratic governments in Asia.

The U.S. and Japan also announced Friday a new agreement to cooperate on the exploration of outer space and the moon and “other celestial bodies.” Secretary of State Antony Blinken and Japanese Foreign Minister Yoshimasa Hayashi signed the agreement at an event at the National Aeronautics and Space Administration headquarters.

U.S. and Japanese officials said Wednesday that the two nations would expand their military cooperation, including by improving what the governments call Japan’s missile counterstrike capabilities and making the U.S. Marine unit in that country more flexible for potential combat. Japan has said it plans to buy hundreds of U.S.-made Tomahawk cruise missiles. At the moment, Britain is the only U.S. ally with the missiles.

While administrations in Tokyo have been reinterpreting the meaning of the constitutional restrictions on the nation’s defense forces for decades, Kishida’s decision to pursue a counter strike capability goes beyond what even some of the more hawkish members of the ruling Liberal Democratic Party have been willing to say publicly.

By making those commitments anew in Washington, and getting vocal support from Biden and other U.S. officials, Kishida is locking in some of his new military pledges. He will now have to navigate getting the Diet, Japan’s parliament, to help deliver on them.

Still, Japan’s move to grow its military power could cause unease in South Korea, another U.S. ally, because of long-standing anger among many Koreans over Japan’s violent occupation of the Korean Peninsula last century. That issue continues to hamper relations between the two nations.

Under the new U.S. deployment arrangement in Japan, those who are serving in Okinawa as part of the 12th Marine Regiment, an artillery unit, will transform into a more mobile group: the 12th Marine Littoral Regiment. The new configuration will allow the troops to more easily fan out to other islands along the coast when needed, U.S. officials said.

The littoral regiment will have about 2,000 troops total and long-range fire abilities that can hit ships.

The agreement will not increase the number of Marines serving in Okinawa, a sensitive issue for Japanese citizens, officials said. Pentagon officials said the restructuring is partly aimed at addressing China’s growing military activity and presence, including around the island of Taiwan, a democracy with de facto independence that the Chinese Communist Party intends to bring under its rule.

In their joint statement Friday, the two nations emphasized the importance of maintaining peace and stability across the Taiwan Strait. They also said the United States was committed to the defense of Japan under their security treaty, including over any conflict in the Senkaku Islands.

Last month, the Kishida administration released a new national security strategy in which Japan committed to spending 2% of its gross domestic product on its annual defense budget, a substantial increase.

It was the long-standing goal of the slain former Prime Minister Shinzo Abe to revise the pacifist clause in Japan’s postwar constitution to reflect the country’s ambitions to change its military posture, Abe was killed this past July, two years after leaving office and before any revisions went through. But in 2015, he pushed through legislation to authorize overseas combat missions for Japan’s military.

As the current government has moved to expand military spending and acquire new equipment, the public — once staunchly opposed to any move that suggested Japan was abandoning its pacifist status — has been largely supportive.

Russia’s invasion of Ukraine last year has made American, Taiwanese and Japanese officials more anxious about the possibility of China trying to attack or impose a blockade on Taiwan. That could depend in the coming years on how Chinese officials perceive the balance of military strength in the region, which includes U.S. forces, U.S. officials say.

The Biden administration has also been working closely with the Japanese government on other volatile security issues in Asia, including North Korea’s ballistic missile testing and its nuclear program. U.S. officials have sought to bolster cooperation with Japan and South Korea over the threats from Kim Jong Un, the leader of North Korea.

Kim launched more than 90 ballistic and other missiles last year, more than in any other year. Those launches included tests of intercontinental ballistic missiles and their components. On Wednesday, President Yoon Suk Yeol of South Korea said his country would develop nuclear weapons of its own or ask the U.S. to deploy them on the Korean Peninsula if the North Korean nuclear threat grows.