As Israel’s Netanyahu nears victory, trouble may lie ahead.

By Josef Federman | The Associated Press

JERUSALEM >> After four inconclusive elections, it looks like the fifth time finally worked for Benjamin Netanyahu.

Israel’s longtime former prime minister and current opposition leader appears to have engineered a surprising victory in the country’s fifth national vote since 2019, thanks to help from an extremist far-right party. This alliance could have profound implications, though — potentially ending his legal troubles at home while antagonizing friends abroad.

With nearly 90% of the ballots counted Wednesday, all signs pointed to a victory by Netanyahu and his religious and nationalist allies. The count, including 450,000 absentee ballots, was expected to be completed today. 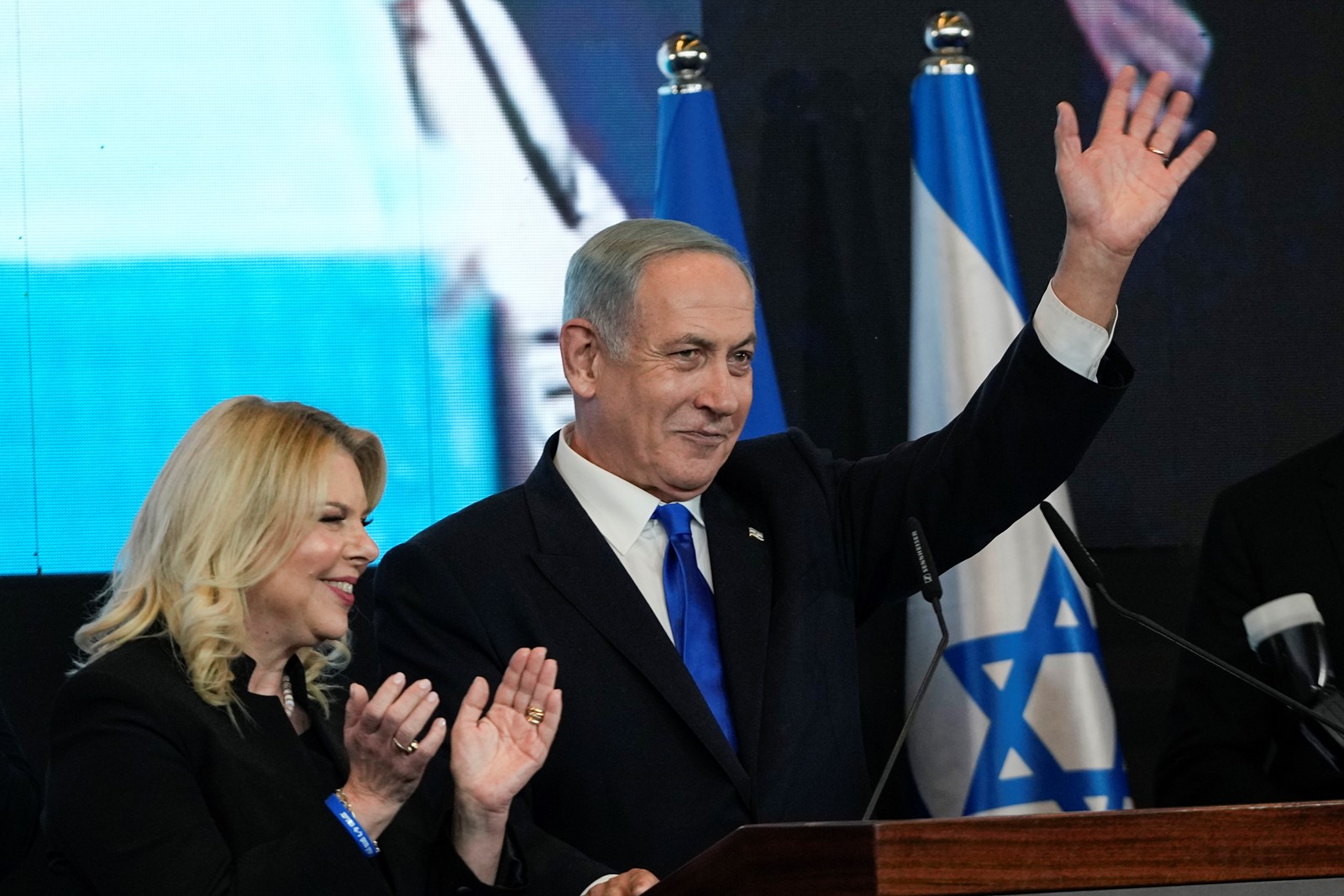 Benjamin Netanyahu, with his wife Sara, waves in Jerusalem on Wednesday.  Netanyahu is likely to become Israeli PM again.

Tuesday’s election, like the previous four, was seen largely as a referendum on Netanyahu’s fitness to rule while facing corruption charges. And once again, opinion polls had been forecasting a continuation of the deadlock that has paralyzed the political system for the past 3½ years.

But Netanyahu, Israel’s longest-serving prime minister who has gained a reputation as apolitical mastermind during a total of 15 years in office, appears to have outsmarted his opponents with a disciplined campaign.

Israeli media portrayed Netanyahu as the winner on Wednesday, though he had yet to declare victory and his main rival, acting Prime Minister Yair Lapid, did not concede as vote counting continued.

Israelis vote for parties, not individual candidates, and coalition-building is needed to secure a governing majority in parliament.

According to official results from Israel’s Central Election Committee, the popular vote was almost evenly divided between parties loyal to Netanyahu and those who backed Lapid.

But Netanyahu, who has been opposition leader for a year and a half, worked diligently to shore up his bloc of allies with a series of cooperation deals and mergers to ensure that no votes were lost. His ultra-Orthodox religious allies, who joined him in the opposition, worked hard to ensure heavy turnout.

Politicians on Israel’s left, in contrast, were riven by infighting, leaving one or two small parties below the threshold required to enter parliament. That means that all of their votes are lost. As a result, Netanyahu is expected to control as many as 65 seats in the 120-seatparliament.

“Netanyahu took charge of his bloc and designed a political architecture that had no leakages, that ensured that 100% of the vote contributed to victory, where the other camp was to some extent in disarray,” said Yohanan Plesner, president of the Israel Democracy Institute, a Jerusalem think tank.

Netanyahu also tapped into the rising popularity of Religious Zionism, an extremist right-wing party whose leaders are openly anti-Arab and oppose LGBTQ rights.

Once seen as a fringe phenomenon, the party emerged as the third-largest in parliament, thanks in large part to the popularity of lawmaker Itamar Ben-Gvir.

This alliance could turn out to be a mixed blessing for Netanyahu.

If he succeeds in putting together a governing coalition in the coming weeks, Religious Zionism members, along with members of Netanyahu’s own Likud party, have made no secret they will seek radical reforms in the country’s legal system to benefit Netanyahu.

Simcha Rothman, a member of Religious Zionism, said the country’s attorney general should worry about her job. Others seek control over judicial appointments and want to pass legislation that would allow parliament to overturn unfavorable court decisions.

Ben-Gvir has said he would even press for legislation that would grant immunity and dismiss the charges against Netanyahu, who is accused of fraud, breach of trust and accepting bribes in a series of scandals.

“If the right-wing bloc keeps its advantage in the final tally, Netanyahu will be able to form his dream government,” wrote Matti Tuchfeld, a commentator in the conservative Israel Hayom newspaper. “Most importantly perhaps: none of the lawmakers … will oppose any steps to change the justice system, including steps relating to Netanyahu’s trial.”

While this could benefit Netanyahu at home, it could also cause some serious troubles for him on the international stage.

Ben-Gvir is a disciple of the racist rabbi, Meir Kahane, whose views against Arabs were considered so repugnant he was banned from the Knesset in the 1980s and whose Kach party was branded a terrorist group by the U.S. Kahane was assassinated by an Arab assailant in the U.S. in 1990.

Ben-Gvir, a lawyer who has spent his career defending Jewish extremists accused of violence against Palestinians, has turned himself into one of Israel’s most popular politicians, thanks to his frequent media appearances, cheerful demeanor and orchestrated stunts.

He has branded Arab lawmakers “terrorists” and called for their deportation, and recently brandished a handgun in a tense Palestinian neighborhood of Jerusalem as he urged police to shoot Palestinian stone-throwers.

Trying to capitalize on a recent spike in West Bank violence, he and his allies hope to grant immunity to Israeli soldiers who shoot at Palestinians and want to impose the death penalty on Palestinians convicted of attacking Jews. Ben-Gvir has said he will seek the Cabinet post putting him in charge of the national police force.

During the campaign, he railed against Lapid for allowing an Arab party to be part of the outgoing government. His campaign slogan, referring to Arabs, called for showing Israel’s enemies “who owns the house.”

While such views have endeared him to his religious and nationalist supporters, they risk creating headaches for Netanyahu, who promotes himself as a global statesman.

U.S. President Joe Biden, who has had a hot-and-cold relationship with Netanyahu, is a supporter of Palestinian independence. He is unlikely to take kindly to the combative Ben-Gvir and his colleagues.

Likewise, American Jews, who tend to be politically liberal, could also have a hard time backing a government in which Ben-Gvir plays a prominent role.

“The likely formation of an ultra-right Netanyahu government should force a moment of serious reckoning for all Americans who care about the nature of the U.S.-Israel relationship,” he said.

Michael Oren, a former Israeli ambassador to the U.S., said that if Ben-Gvir is allowed to push forward with some of his proposals, such as expelling families of Palestinian attackers, it could strain ties.

“I think he’s going to pose some challenges,” Oren said.