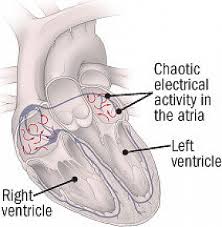 DEAR DR. ROACH >> My husband is taking Eliquis for atrial fibrillation (AFib). The cost is going up, and there is no generic brand for Eliquis. Looking at drug websites, I have found other drugs that are anticoagulants: Xarelto, heparin and warfarin are a few. Is there a generic brand you would recommend that we can ask his doctor about to see if they will let him take that instead?

Dear C.A. >> Most people with AFib benefit from anticoagulants to reduce the risk of stroke. The vast majority of people with AFib without valvular disease will take either a direct-acting oral anticoagulant (DOAC) such as apixaban (Eliquis), dabigatran (Pradaxa),edoxaban (Savaysa), rivaroxaban (Xarelto) or warfarin (Coumadin). Most experts choose one of the DOACs over warfarin because they have been proven to have lower risk of both stroke and major bleeding, compared with warfarin. Also, warfarin has to be carefully monitored by blood testing of the clotting time. People with some types of heart valve disease require warfarin therapy. Generic forms of DOACs have been approved by the FDA, but are not available in pharmacies at the time of this writing.

Among the different DOACs, some, like edoxaban, need to be dosed twice a day, which is an issue for some people. A very recent study showed that apixiban was slightly superior torivaroxaban both at preventing stroke and in reduced bleeding, with one fewer blood clot or stroke and two fewer bleeding episodes per 100 people taking the medicines for a year.  Otherwise, there is very little evidence to guide which is the best agent.

The cost, however, varies widely among the different agents depending on insurance coverage, and you can ask your husband’s doctor if he could take a different medicine from Eliquis. I looked on goodrx.com, and the costs vary tremendously from $200/month to over$500/month (without insurance). Some people take additional medicines, which may interact with one or more of the DOACs, so that needs to be considered.

Warfarin is very inexpensive, less than $5/month, but has the disadvantages of requiring frequent blood draws and a higher risk of both bleeding and stroke. Heparin (including low molecular weight heparin) is almost never used for long-term treatment of AFib except during pregnancy.

DEAR DR. ROACH >> My oldest daughter would like your advice regarding COVID-19 booster vaccinations. She has been seeking guidance, but so far, she has not been able to find anything that pertains to someone in her situation. She got the Johnson & Johnson vaccine in March 2021 and a Moderna booster in Oct. 2021. She is in her mid-30s, works as a flight attendant and has a young child. Also, her husband has rheumatoid arthritis. Should she get a bivalent booster to better cover Omicron? And if so, then which would be better: Pfizer or Moderna?

Dear B.H. >> I would strongly recommend either the Pfizer or Moderna bivalent boosters for her. Most of the data are for keeping the same booster (Moderna for her), although there are some theoretical reasons why mixing and matching might be advantageous.