Border sheriffs slam DC mayor, officials for declaring emergency over migrant buses: 'They have seen nothing'

Washington, DC, has been sent approximately 10,000 migrants from Texas and Arizona since April.

Sheriffs dealing with the crisis at the southern border are taking aim at Washington, D.C., for declaring a public emergency over the migrants that have been bused into the sanctuary city by Texas and Arizona -- and bristling at claims that the buses have turned D.C. into a "border town."

"They have seen nothing. They are not a border town. They don't know what a border town is," Goliad County, Texas, Sheriff Roy Boyd told Fox News Digital.

Mayor Muriel Bowser on Thursday declared a public emergency over the migrant buses which have been coming to D.C. from Texas and Arizona since April. She said the move would allow the city to create an Office of Migrant Services to provide migrants with accommodation, health care, transportation and other services.

"We’re putting in place a framework that would allow us to have a coordinated response with our partners," Bowser said Thursday. "This will include a program to meet all buses, and given that most people will move on, our primary focus is to make sure we have a humane, efficient, welcome process that will allow people to move on to their final destination." 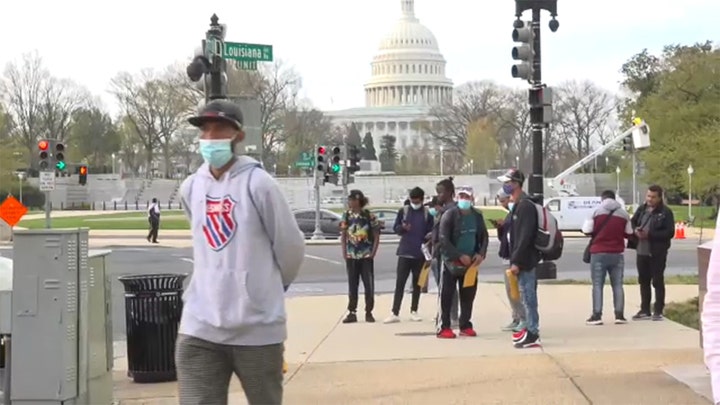 A group of migrants were bused from Texas to Washington, D.C., where they were dropped off blocks from the U.S. Capitol on April 13, 2022.  (Fox News).

She is one of a number of liberal mayors and officials of self-proclaimed "sanctuary cities" who have sounded the alarm over the influx of migrants -- which represent just a fraction of those encountered at the border. A D.C. councilmember sparked pushback when she declared that "in many ways, the governors of Texas and Arizona have turned us into a border town,"

Texas has sent less than 10,000 migrants to D.C. since April, while Border Patrol has so far encountered over 2 million migrants this fiscal year, with monthly encounters regularly hitting the 200,000 mark. Sheriffs and border officials who have been dealing with the crisis since shortly after President Biden took office have responded with astonishment at the noises coming from the cities.

"I think it's all a bunch of political grandstanding, trying to get themselves some attention and squeeze a little bit of money out of the federal government or somewhere else that they can use for whatever they think it's needed for," Boyd said. "If they want to see what it looks like. They can come down here for us. It's being shoved on us by the federal government and their policies and their lack of enforcement."

Boyd is one of a number of sheriffs and border officials saying D.C. and New York are just getting a taste of what they have experienced daily since the crisis began.

"‘Welcome to our world’ is what they say," Jonathan Thompson, executive director and CEO of the National Sheriffs’ Association told Fox News Digital. "Welcome to the everyday problems we are facing, and you have been ignoring and that you continue to want to blame someone else for."

"The sheriffs on the border right now are living this every day," Retired Texas Sheriff Clint McDonald, the executive director of the Southwestern Border Sheriff’s Coalition, told Fox News Digital. "And they've been criticized for asking for help with what they're going through. And now that major cities are starting to feel this pressure, it seems to be a whole different scenario for them than it is for the people who live it every day."

"So we don't have sympathy for these people," he said.

Both sheriffs' groups described those based on that border as overwhelmed and exhausted from months of encounters that exceed 150,000 -- and the knock on effects of the crisis.

"They're upset about what is going on," McDonald said. "And this is what is happening for our people every day. So the whole situation has got the border region upset and and we're trying to survive day to day --  then they receive a few of these people in their communities and they're screaming for help when our border sheriffs cannot get any help."

Boyd said he supported the move by Abbott, saying it had made the border crisis -- which he said has been ignored by liberal media outlets -- back into focus.

"It was a brilliant move on the part of Governor Abbott in order to ensure that the word began to spread through channels that previously had ignored the problem," he said.

Thompson urged D.C. to stop blaming border states and turn their focus on the Biden administration.

"We finally now have cities and communities that are experiencing real pain, real suffering, and they want to blame someone else. Well, they should pick up the phone and dial [The White House]. Talk to the president…That's who owns the policy, that's whose policy it is and that's what's directing the surge."

McDonald told Fox News Digital that it wasn’t just Republican sheriffs who are upset with the crisis, but Democrats as well.

"The people on the border realize that this is not a red issue, and it's not a blue issue. It's a red, white and blue issue," he said. "And it's time America takes care of Americans. And right now, we're just not doing that."