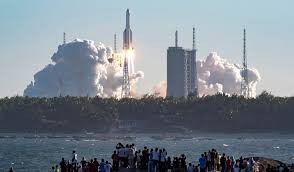 By Fox News and The Associated Press

The massive core of a Chinese rocket used last week in the launch of the first leg of its space station ambitions is whipping around Earth in a low orbit — and where it lands is anybody's guess.

SpaceNews reported that the core of the Long March 5B will reenter the Earth sometime next week as one of the "largest instances of uncontrolled reentry of a spacecraft and could potentially land on an inhabited area."

The website estimated that the roughly 100-foot object is orbiting Earth every 90 minutes and zips past north of New York, Beijing and as far south as New Zealand.  The report said that despite the threat it is most likely to splash in one of the world's oceans or in an isolated area.

Jonathan McDowell, a spaceflight observer, told the website that since 1990 there have been no instances of any spacecraft over 10 tons that have "been deliberately left in orbit to reenter uncontrolled."

The report said the rocket’s core stage, when empty, is about 21 metric tons in mass. (You can track the rocket here.)

"It’s potentially not good," McDowell said, according to The Guardian. "Last time they launched a Long March 5B rocket they ended up with big long rods of metal flying through the sky and damaging several buildings in the Ivory Coast."

The Tianhe, or "Heavenly Harmony," module blasted into space atop a Long March 5B rocket from the Wenchang Launch Center on the southern island province of Hainan. The payload is the main module of its first permanent space station.

The Chinese space program is a source of huge national pride, and Premier Li Keqiang and other top civilian and military leaders watched the launch live from the control center in Beijing.