By Jack Stieber | The Epoch Times

Democrats are pointing to how Senate Majority Leader Mitch McConnell (R-Ky.) blocked an attempt to authorize $2,000 stimulus checks in trying to convince voters to vote Democrat in the upcoming Georgia Senate runoff elections.

“Mitch McConnell, Kelly Loeffler & David Perdue are standing between your family and a $2,000 survival check Georgia,” Rep. Ayanna Pressley (D-Mass.) wrote in a tweet on Tuesday night, urging Georgians to cast ballots for Warnock and Ossoff.

While both Loeffler and Perdue say they support the $2,000 checks, they were helpless to stop McConnell from blocking a unanimous consent request for the CASH Act, which would boost checks in the new COVID-19 relief package by $1,400.

Republicans have argued that losing control of the Senate would imperil the Republic, potentially giving Democrats control of the White House and both chambers of Congress. Democrats say McConnell primarily acts defensively, blocking a raft of House-passed bills from being voted on in the Senate.

“Jan. 5 determines control of the Senate. If we win, Joe Biden gets a chance to enact his agenda. If we lose, Mitch McConnell, the obstructionist-in-chief, remains in charge,” Sen. Chris Murphy (D-Conn.) said in a tweet.

The two Senate seats “may well determine whether we can deliver more relief to the American people next year,” Sen. Chris Coons (D-Conn.) said on “CBS This Morning” on Wednesday.

Ossoff and Warnock also targeted McConnell after he blocked passage of the Act. 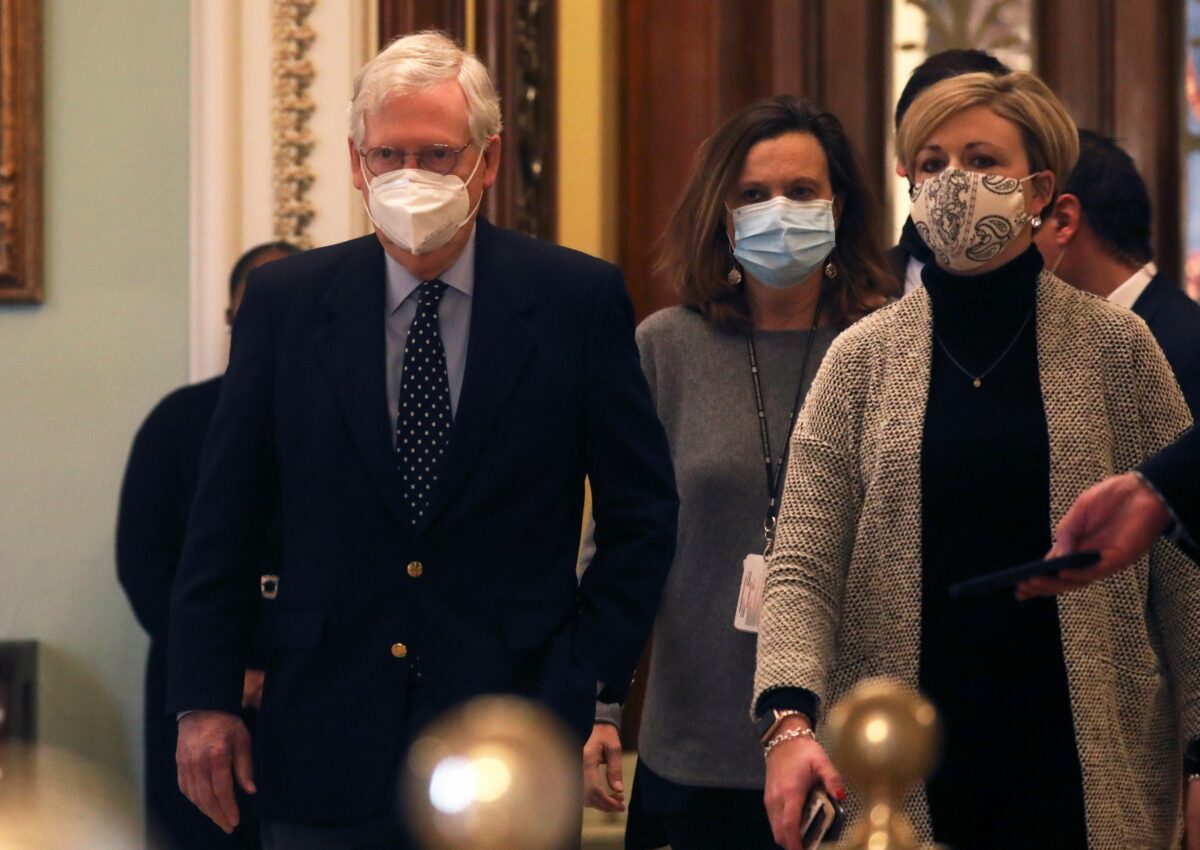 “Minority Leader Mitch McConnell,” Ossoff said on Twitter. “But only if you vote.”

Warnock said promises from Loeffler and Perdue “are useless as long as Mitch McConnell controls the Senate and can block a #StimulusCheck they never really supported.”

McConnell later Tuesday introduced a bill that combines the higher payments with a repeal of Section 230 of the Communications Decency Act and the establishment of a committee that would examine voter fraud allegations.

Critics say the bill was designed to fail.

Sen. Dick Durbin (D-Ill.) said during an appearance on CNN that McConnell wants to “throw a few poison pills in there” to discourage senators from voting for the increased checks. “Let me throw in a reform of the internet while we’re at it here. Let’s do some work here and investigate the last election. For goodness sakes, stop looking for poison pills, Sen. McConnell, pass this right now. America needs it.”

Loeffler on Wednesday called for voters to choose her and Perdue so Republicans keep control of the Senate.

“This is the battle of our lifetime—and it’s being decided right here in Georgia. This is a choice between the American Dream and radical socialism that would change our country as we know it,” Loeffler wrote on Twitter, making no mention of the stimulus checks.

Perdue, meanwhile, blamed Democrats, accusing them of holding up relief “for months.”

McConnell “is trying to do” things that Trump asked for, Perdue said on Fox, adding: “I think this is the right thing to do.”