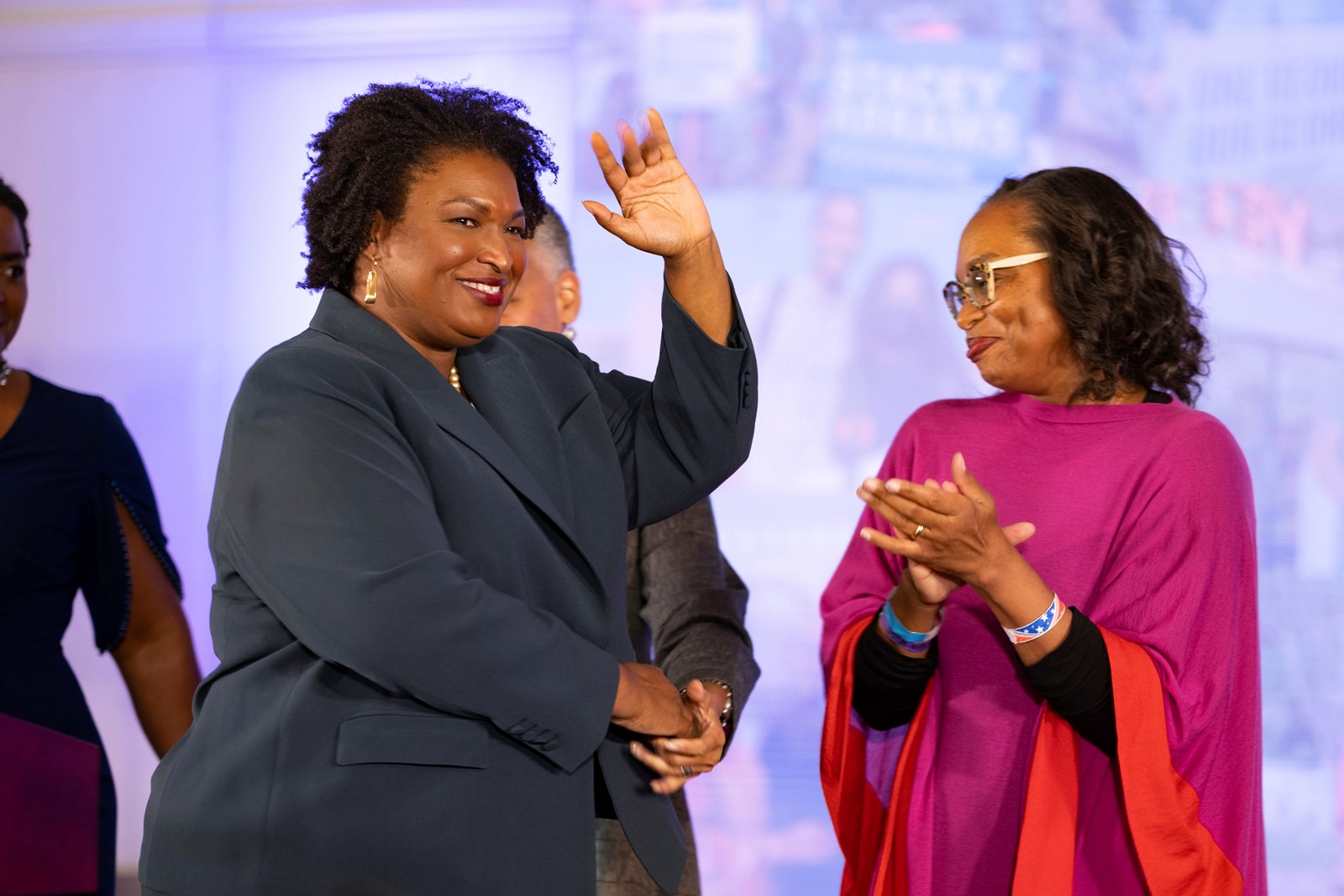 Georgia Republican Gov. Brian Kemp claimed victory Tuesday after Democratic challenger Stacey Abrams conceded to the incumbent in a rematch of their 2018 race.

“Well, it looks like the reports of my political death have been greatly exaggerated,” Kemp told supporters in a sometimes-defi ant victory speech after two years of trouble had threatened to snuff out his reelection bid.

Kemp argued in his victory speech that his campaign, which saw him use the power of his office to shower tax cuts and cash on voters while attacking Abrams for being insufficiently supportive of police, was a recipe for Republican success in Georgia. Democrats believed that an increasing share of nonwhite voters would put them on the path to victory in the state.

“This election proves that when Republicans stay focused on real world solutions that put hard-working people first, we can win now, but also in the future, y’all.” Kemp said.

Abrams told supporters that her efforts has not been in vain, saying her fight had allowed people to imagine a different state.

“I may no longer be seeking the office of governor, but I will never stop doing everything in my power to make sure the people of Georgia have a voice.” 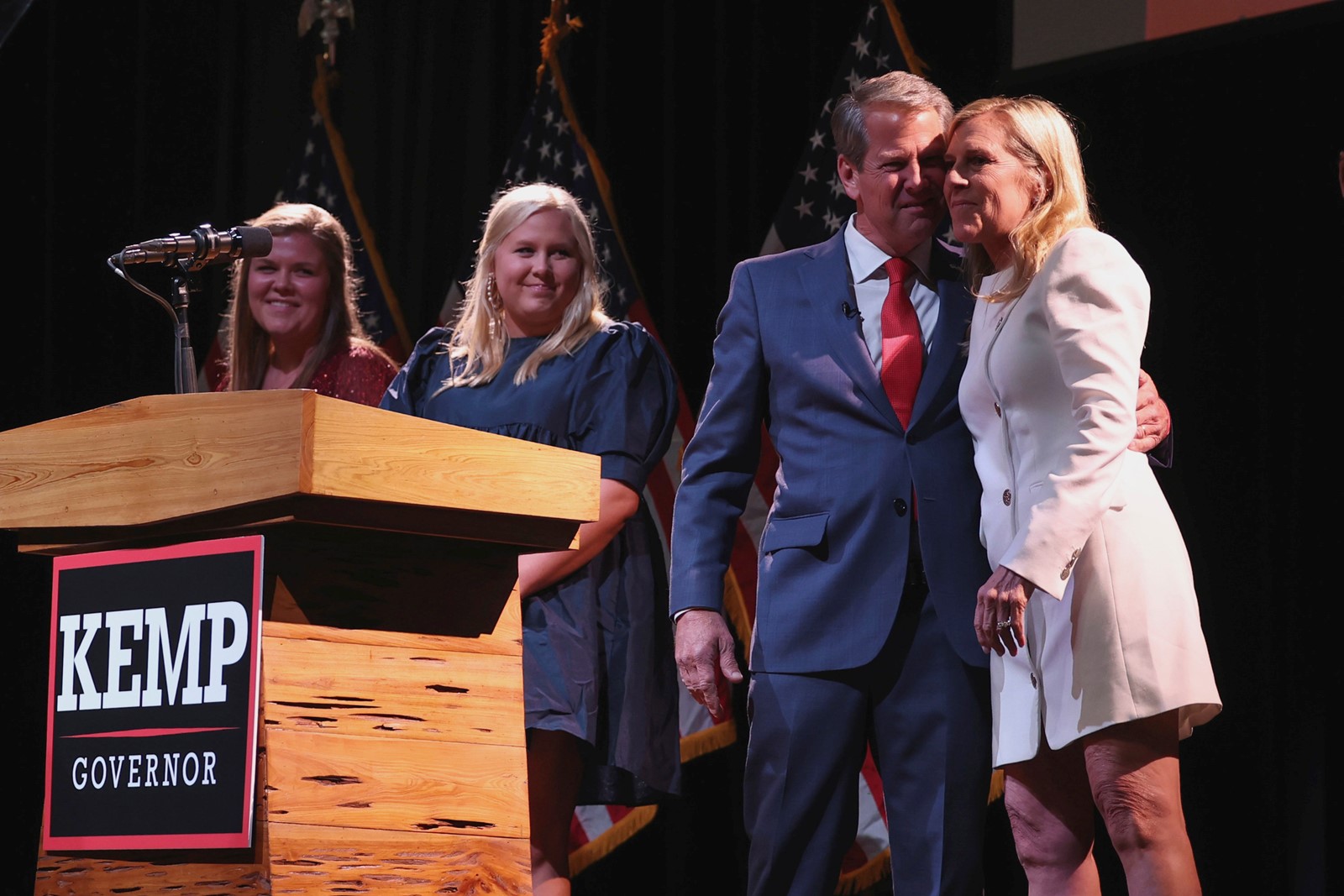 • A printing malfunction at about one-quarter of the polling places across Arizona’s most populous county slowed down voting Tuesday, but election officials assured voters that every ballot would be counted.

Still, the issue at 60 of 223 vote centers in Maricopa County gave rise to conspiracy theories about the integrity of the vote in the pivotal state. Former President Donald Trump, Republican gubernatorial candidate Kari Lake and others weighed in to claim that Democrats were trying to subvert the vote of Republicans, who tend to show up in greater numbers in person on Election Day.

Lake and several other candidates on the Arizona ballot have pushed false claims about the2020 presidential race, amplifying Trump’s lies about a stolen election. But election officials from both political parties and members of Trump’s own Cabinet have said there was no widespread voter fraud and that Trump lost reelection to Democrat Joe Biden.

Maricopa County Superior Court Judge Timothy Ryan denied a request from Republicans to keep the polls open, saying that he didn’t see evidence that people were not allowed to vote.

After polls closed, the county supervisor, Republican Bill Gates, apologized, but said “every voter had the opportunity to vote and have their vote counted.”

The issue affected an unknown number of ballots in the county. About 4.5 million people live in the sprawling city and about 2.4 million are registered voters. More than 80% cast their ballots early, most by mail, and the county said about 230,000 had voted in-person about an hour before polls closed.

DeSantis’ win continues a rightward shift for what was formerly the nation’s largest swing state, with voters in even the once-Democratic stronghold of Miami-Dade County embracing a governor who framed his candidacy as a battle against what he characterized as the “woke agenda” of liberals.

• Abortion was on the ballot in several states Tuesday, months after the Supreme Court overturned the right to abortion in a decision that led to near-total bans in a dozen states.

The most intense focus was on Michigan, where there was a push in the presidential battleground to protect abortion rights in the state constitution, and Kentucky, a GOP stronghold where a legal battle over a restrictive law is already underway.

Voters in solidly Democratic Vermont decided to enshrine such rights in their state constitution, while California voters weighed a similar step. Montana voters, by contrast, were considering newborn resuscitative care requirements with criminal penalties, including the rare case of an attempted abortion.

In Michigan, supporters of the measure collected more signatures than any other ballot initiative in state history.

The measure, if passed, would put a definitive end to a 1931 ban on abortion.

• Voters in five states were deciding on Election Day whether to approve recreational marijuana, a move that could signal a major shift toward legalization in even the most conservative parts of the country.

The first result came in Maryland, where voters approved legalization, making it the 20thstate to take that step. Measures also were on the ballot in Arkansas, Missouri, North Dakota and South Dakota.

The victory underlined Abbott’s durability. Despite record spending in the race that topped more than $200 million combined, O’Rourke was in danger of losing by double-digits just four years after his narrow U.S. Senate loss that was the closest by a Texas Democrat in decades.

“Tonight, Texans sent a very resounding message,” Abbott said during a victory speech in the southern border city of McAllen.

Moore’s victory flips a governor’s office from Republican to Democratic.

Only two other Black politicians have ever been elected governor in the United States —Virginia’s Douglas Wilder in 1989, and Deval Patrick of Massachusetts in 2006.

Healey, the state’s first woman and openly gay candidate elected to the office, defeated Republican Geoff Diehl, a former state representative who had the endorsement of former President Donald Trump.

Her election returns the governor’s office to Democrats after eight years of Republican leadership under the popular Gov. Charlie Baker, who opted not to seek reelection.