Bulldogs cruise to 65-7 victory amid a rapidly changing landscape for the sport. 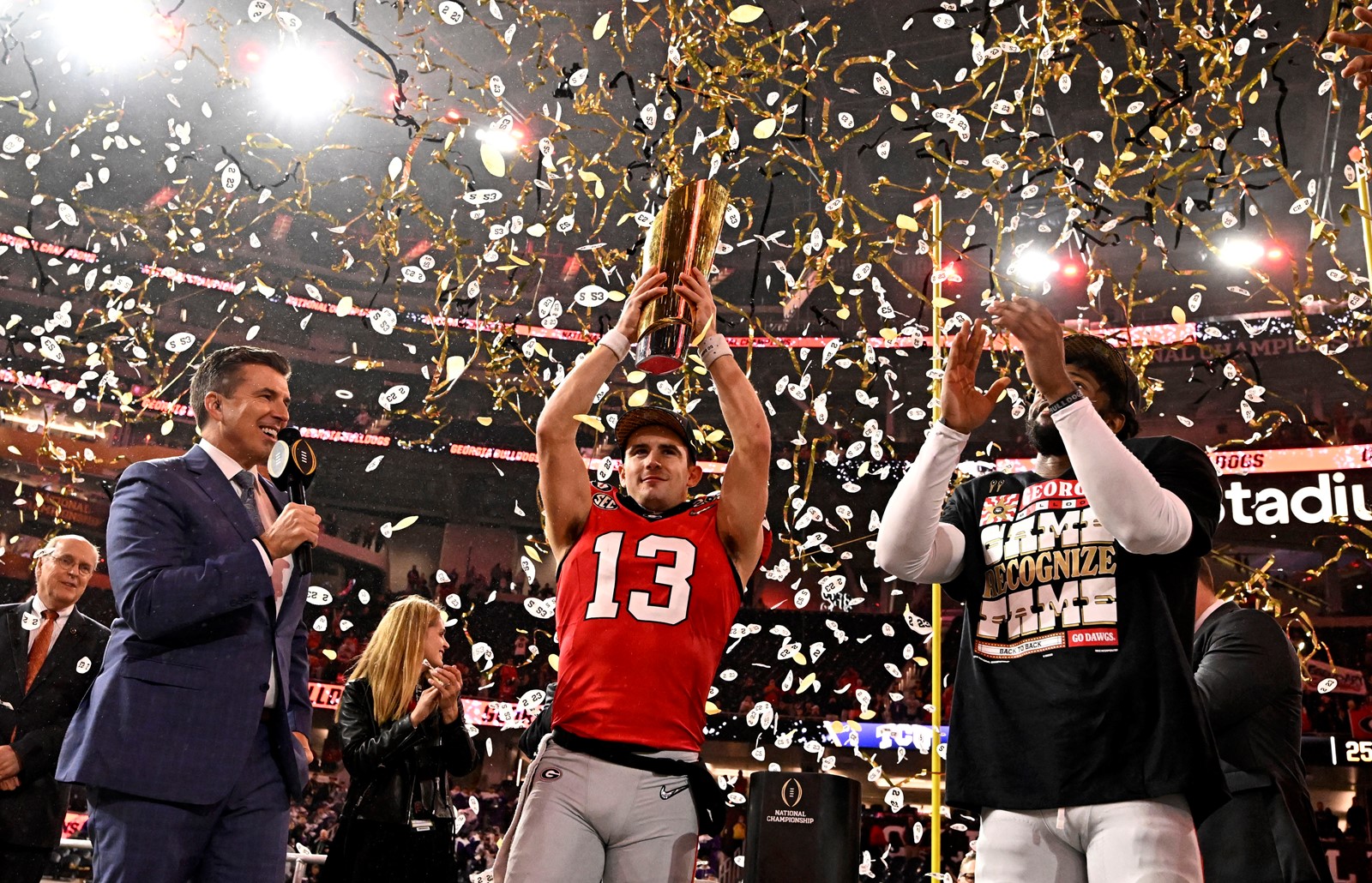 INGLEWOOD >> Georgia was carried to LAX and its national title defense last week by aDelta plane whose fuselage bore the signature of the man who built the Bulldogs’ first dynasty — Vince Dooley.

The Bulldogs’ final preparations in recent days also included a video of Dooley, who died Oct. 28, his words both haunting and familiar.

“It’s easier sometimes to try and get there then try to be there and hold onto it and defend, ”Dooley said in the video. “You better get ready; you better buckle up your chinstrap.”

The Bulldogs were more than ready.

Georgia, buckling up and hunkering down, continued its reign over college football’s ever-changing landscape with a 65-7 rout of Cinderella TCU on Monday night, capping perhaps the most seismic season in the sport’s history with 60 devastating minutes of certainty. 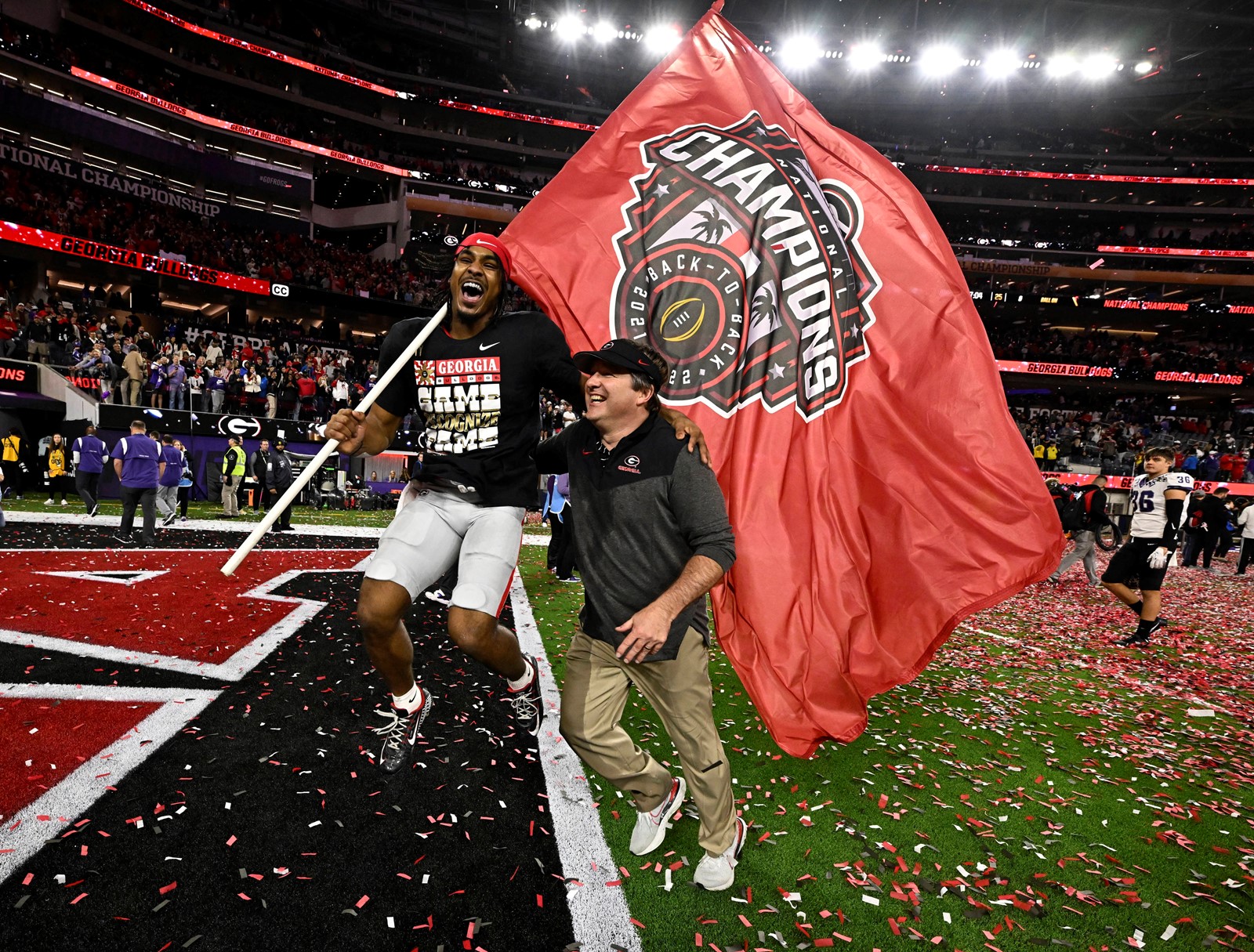 Georgia’s Kenny McIntosh, left, celebrates with head coach Kirby Smart. The decisive win came as college football goes through a period of upheaval, with schools bolting conferences and players transferring easily and cashing in on their fame.

In keeping the national title between the hedges to become the first school to successfully defend its crown since Nick Saban’s Alabama did so in 2012, Georgia’s triumph in the College Football Playoff championship game before 72,628 at SoFi Stadium served as a reminder that even in the sport’s most transformative decade, one thing remains constant —the season ending with an SEC school lifting the national title game’s gold trophy into a downpour of confetti.

Completing a perfect 15-0 season, securing its 17th consecutive win, Georgia captured the SEC’s fifth consecutive national championship with the most lopsided victory in the game’s history.

The SEC’s 12th title in the past 16 years was never really in question.

By halftime up at St. Simons and Jekyll Island, in Statesboro and Lawrenceville, Dacula and Valdosta, Bainbridge and Moultrie, Dawgs fans already had plenty to celebrate.

Stetson Bennett’s precision passing and timely running and an overpowering defense that has been a trademark of Bulldogs head coach Kirby Smart’s seven seasons at his alma mater put Georgia up 38-7 after 30 minutes.

Bennett threw for two touchdowns and ran for two more, and the Bulldogs forced three-Horned Frogs turnovers in a first half that left TCU completely overwhelmed.

“We had things go about as bad as they could go in the first half,” TCU head coach Sonny Dykes said. “We turned the ball over three times; we gave up big plays. I think early on our guys were a little wide-eyed.”

The view from the TCU sideline didn’t get any better in the second half. Bennett, a 25-year-old former walk-on nicknamed the “Mailman” because he always delivers, completed 18 of 25 passes for 305 yards and four TDs on the night. He was responsible for 36 Georgia points, equaling a national title game record. The Bulldogs rolled up 589 yards total offense,485 in the first three quarters.

The laying of the foundation of a Georgia dynasty and the SEC’s continued dominance of the nation’s second most popular sport belied the uncertainty and unprecedented change rumbling through what has become a $4 billion industry.

The scramble to secure slices of nine- and 10-figure media rights deals amid a decades long arms race has dramatically changed the game’s topography, diminished one-time New Year’s Day icons like the Rose and Orange bowls to the undercard to a College Football Playoff that will expand to 12 teams in 2024, tore apart the 118-year-old Pac-12 and threatened to reduce the sport’s Power Five conferences to a Power Two.

All of which leaves many in the sport convinced that college football has never been more popular — and never more rudderless.

“I just feel that college football right now, who are the leaders?” said Kirk Herbstreit, the former Ohio State quarterback and longtime ESPN analyst. “Who’s making the decisions to ultimately try to have those kind of conversations? It’s most definitely not the NCAA. I’m very anxious to see where our future goes as we get ready for this 12-team playoff as we still wait for more realignment. There are so many unknowns right now in college football.”

USC and UCLA, having limped across the finish line of their 2022 seasons, are headed in2024 to the 14-member Big Ten, a conference that supplied half of this season’s CFB Playoff final four, chasing the riches of the conference’s $7 billion, seven-year media rights deal, trading Saturdays against longtime rivals on The Farm or the shores of Lake Washington for road trips to the Ann Arbor’s Big House and college football wastelands like New Brunswick, New Jersey, and College Park, Maryland.

Texas, which already has its own television network, and ancient foe Oklahoma are taking their Red River Rivalry to the SEC.

The expansion of the College Football Playoff will pour an additional $1.9 billion into the sport.

The schools aren’t the only ones on the move or following the money.

When Georgia and TCU kicked off Monday, there were 1,746 Division I football players in the NCAA’s transfer portal. Bennett won the Bulldogs’ starting quarterback job a month into the 2021 season after former Mater Dei star J.T. Daniels, who had transferred from USC, suffered an oblique injury. Daniels spent this season at West Virginia. Next fall he is expected to take snaps at Rice, his fourth university.

“Look, we were preparing this week for a national championship game and we had six transfers on campus on an official visit,” Dykes said. “And you’re just kind of like, really? I mean, are we really doing this?

The vast migration of tailbacks and free safeties is as much about Name, Image and Likeness deals as it is playing time. The U.S. Supreme Court unanimously ruled in June2021 that the NCAA could not legally limit any education-related payments to students.  TCU was on the verge of emerging as a Top 10 contender in 1985 when then-Horned Frogs head coach Jim Wacker learned of and then reported to the NCAA that players were receiving cash and other benefits in violation of NCAA rules. Despite Wacker’s forthrightness, TCU received NCAA penalties that it took decades to overcome. Among the charges: that TCU players had $700 busboy jobs at a pizza parlor owned by a Horned Frogs alum.

“So right now, I think it’s just a mess,” Herbstreit said. “I think the sport of college football across the board is a mess in a lot of different areas,”

For 60 convincing minutes Georgia provided a respite from uncertainty. At one of SoFi’s end zones, high winds blew a cold rain beneath the stadium’s roof into the stands, drenching hundreds of fans. Below them Georgia, yet another SEC champion, celebrated under a shower of red and white confetti.