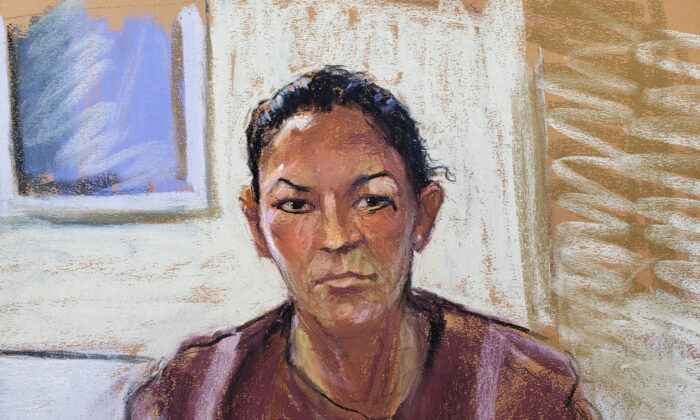 Ghislaine Maxwell appears via video link during her arraignment hearing where she was denied bail for her role aiding Jeffrey Epstein to recruit and eventually abuse of minor girls, in Manhattan Federal Court, in the Manhattan borough of New York City on July 14, 2020. (Jane Rosenberg/Reuters)

U.S. prosecutors have produced nearly 3 million pages of evidence in the case against Jeffrey Epstein associate Ghislaine Maxwell, they disclosed in a new court filing.

“As the Court is aware, the Government has produced to the defendant more than 2.7 million pages of discovery pursuant to the Government’s various discovery obligations,” U.S. Attorney Audrey Strauss wrote in a letter to the judge overseeing the case.

The number is an increase of 1.5 million pages since November 2020.

Defendants then complained that the “voluminous discovery” was too much for Maxwell to review in the time that she was accorded in prison.

The new revelation was part of a challenge to an application from Maxwell’s lawyers requesting a subpoena for records from the law firm Boies Schiller Flexner (BSF), which represents women who were allegedly victimized by the accused sex abuser.

U.S. District Judge Alison Nathan, an Obama nominee, said last month that the subpoena request is being kept shielded from the public “on the ground that it reveals defense strategy.”

She said Boies should provide notice to the alleged victims about the proposed subpoena and told the law firm that it could file an objection to the proposal.

Sigrid McCawley, on behalf of the firm, told the judge that the proposed subpoena “appears to seek personal and confidential information about all of the Epstein victims that BSF represents.” She also argued that the subpoena failed to meet statutory requirements, describing it as “overbroad and non-specific, and a clear fishing expedition to ‘see what may turn up.'”

Strauss in the April 6 letter said the defendant is seeking a subpoena “that appears to directly implicate the Government’s interests by expressly and improperly seeking broad categories of victim information and communications with the Government.”

While prosecutors have not seen the subpoena, “it also appears that the subpoena constitutes a fishing expedition for potential impeachment material, which plainly runs afoul of the Nixon test,” she added, citing McCawley’s filing.

In one example, Maxwell wants to see the “original, complete copy” of an alleged victim’s diary.

The subpoena should be entered into the public docket and, if information needs to be shielded, redactions can be made, prosecutors asserted.

Nathan previously agreed to allow some redactions, ruling that certain information was too “sensitive or confidential.”

Maxwell, who has pleaded not guilty, is slated to go on trial in July.