Hints from Heloise: Jewelry cleaning on the fly 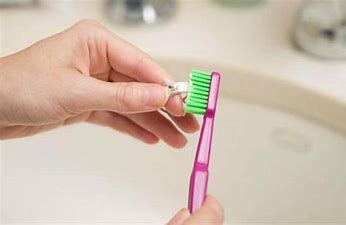 Dear Heloise >> I will often clean my jewelry while I’m watching a movie at home. I bought a jeweler’s shammy to do some polishing, but a couple of times, I couldn’t find it (my daughter was using it). So, I just took a little toothpaste, and with my finger, I gently rubbed the paste on the gold or silver pieces, then rinsed it with hot water from the tap. After that, I took a soft cloth and dried my pieces. Everything sparkled and looked clean and bright.

Dear Rhonda >> Yes, the toothpaste will do in a pinch, but don’t do it often, because toothpaste is usually a bit abrasive and can dull your jewelry over time. Also, avoid this method on softer gems such as pearls, opals or jades. When rinsing your jewelry with hot water after using the toothpaste, either plug the drain in the sink with the drain stopper so nothing goes down the drain by accident.

Dear Heloise >> Can I reuse a marinade? My sister says no, but it seems like such a waste to throw it out after only a single use.

Dear Nell >> No, do not reuse the marinade. You must throw it out, as the risk of bacteria cross contaminating is always present. After all, you’re marinating raw meat, which already contains some bacteria that gets killed while it’s cooked over high heat. That same bacteria lingers in the marinade after you’ve used it.

Dear Heloise >> I have a very large family scattered over the U.S. A few years ago, I decided to create a “family newspaper” and let the rest of the clan know how things were going with various members. Some of the relatives would call, email or send a letter with family news. Everyone loves getting the family newsletter, which is printed on both sides on legal-sized paper. This way, we can stay informed of who had a baby, who joined the armed forces, who’s graduating from or starting college, and much more. I print this up and mail it out about twice a year.

Dear Heloise >> One day, I had lost my house key, and it cost me $70 to get back inside. It was in the early evening, and the locksmith came quickly. But, I realized I needed to do something to stop this from happening again. I had two new keys made, one that I keep hidden in my garage, and the second one is attached to my dog’s collar, under his license tag. My dog will only allow a handful of other people to pet him, so if one of my friends needed to get inside for some reason, they could either get it out of the garage or unhook it from my dog’s collar.

Dear Connie >> I have hidden keys as well. Only two other people know where they are, and these are people I trust because I know where their keys are hidden!