Marking 9 /11, Biden remembers‘ precious lives stolen from us’ in ceremony at the Pentagon

WASHINGTON >> Twenty-one years after the Sept. 11 attacks, President Joe Biden promised to never forget “the precious lives stolen from us” as he honored victims of the worst terrorist strike in American history with a somber wreath-laying ceremony under the pouring rain at the Pentagon.

“I know for all those of you who lost someone, 21 years is both a lifetime and no time at all,” Biden said Sunday in a speech after the ceremony. “It’s good to remember. These memories help us heal. But they can also open up the hurt and take us back to that moment when the grief was so raw.” 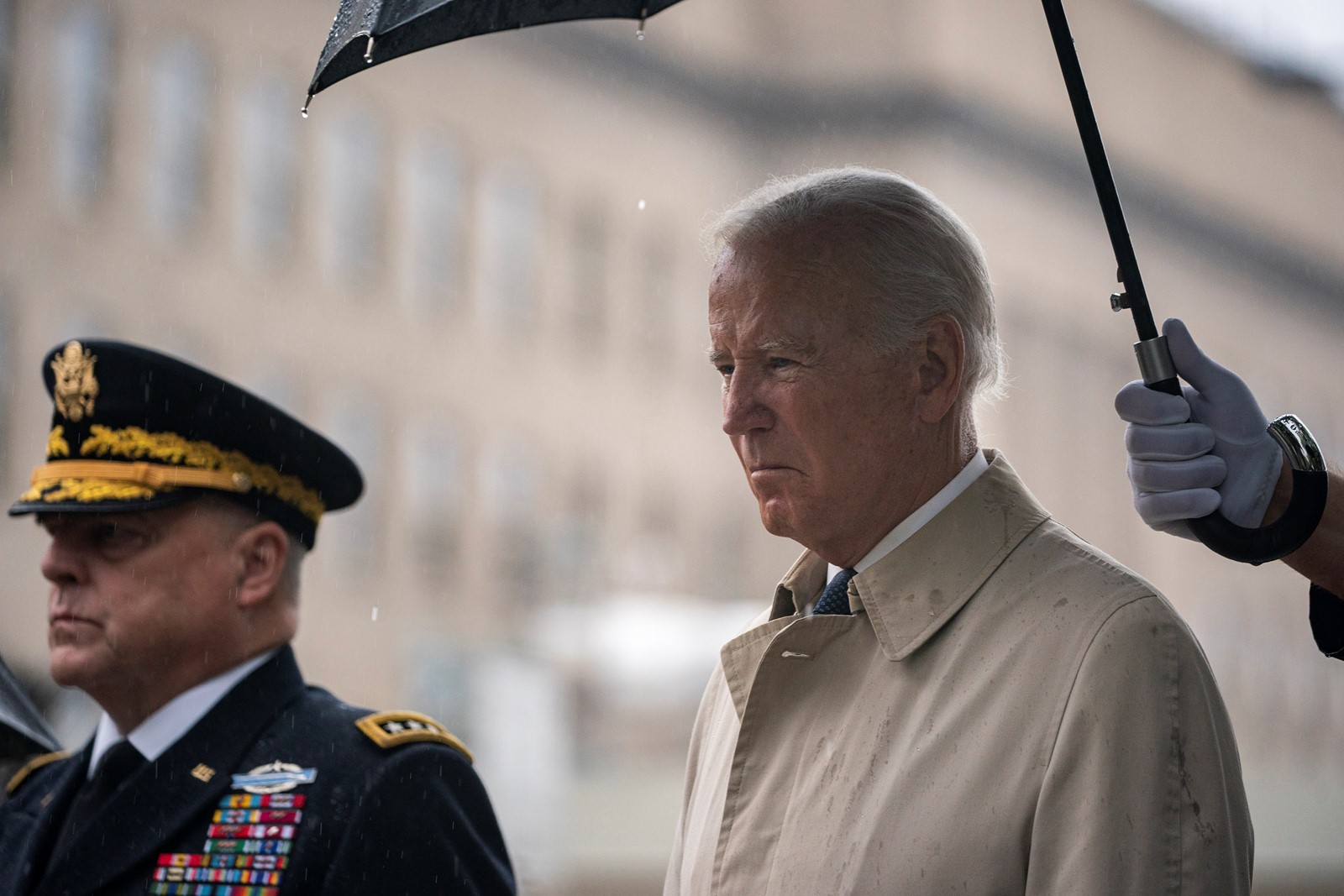 President Joe Biden participates in a moment of silence at the Pentagon on the 21stanniversary of the Sept. 11 attacks, in Arlington, Va., on Sunday.

Members of the Biden administration fanned out across memorials at the sites of the three attacks — Shanksville, Pennsylvania; the Pentagon; and lower Manhattan — to pay tribute to emergency workers and families of the nearly 3,000 victims, who continue to grieve over lost memories, experiences and bonds. Biden also marked the anniversary by encouraging Americans to defend the nation’s democratic system, turning again to a message that the country’s institutions are under threat by forces of domestic extremism.

“It’s not enough to stand up for democracy once a year or every now and then,” Biden said.  “It’s something we have to do every single day. So this is a day not only to remember, but a day of renewal and resolve for each and every American.”

Early in his remarks, Biden recalled part of a message that Queen Elizabeth II, who died last week, sent after the attacks: “She poignantly reminded us, ‘Grief is the price we pay for love.’ ”

The president’s speech came a little more than a year after Biden ended the two-decade war in Afghanistan that the United States began in response to the Sept. 11 attacks. While Biden has defended the decision to pull American troops out of the country, the chaotic and haphazard nature of the withdrawal is also one of the darkest moments of Biden’s presidency.

As the Afghan government collapsed in August 2021, a bombing killed as many as 170 Afghans and 13 American troops outside the Kabul airport. The United States has welcomed tens of thousands of Afghans who assisted American troops to the country, although many others who had hopes of immigrating remained overseas, even after Biden promised they would have a home in the country.

Biden said Sunday that his administration remained determined to hold accountable those responsible for the attacks, pointing to last month’s killing of al-Qaida leader Ayman al-Zawahri in a CIA drone strike. “Our commitment to preventing another attack in the United States doesn’t end,” Biden said.

The first lady, Jill Biden, commemorated the day by visiting Shanksville and recalled the sorrow of realizing that her sister Bonny Jacobs, a flight attendant, could have lost colleagues in the attack.

“When I got to her house, I realized that I was right. She hadn’t just lost colleagues; she had lost friends,” Biden said. “As we learned more about that dark day, she felt pride for what happened here as well — pride that it was fellow flight attendants and passengers of United Flight 93 who fought back, who helped stop the plane from taking an untold number of lives in our nation’s capital.”

The scene outside the memorial in New York followed a familiar pattern. Vice President Kamala Harris and Mayor Eric Adams stood by as family members carried photos of their loved ones while others carried American flags or roses. There were sudden looks of recognition and hugs between people who saw each other once a year. As the honor guard entered and the national anthem was sung, participants who had been gripping pictures of their loved ones held them aloft.

There were moments of silence at 8:46 a.m., when Flight 11 struck the north tower of the World Trade Center, and at 9:03, when Flight 175 struck the south tower. The reading of the victims’ names brought both tears and fond remembrances.

David Albert was 13 when his father, Jon Leslie Albert, a vice president for information technology with Marsh & McLennan Cos. Inc., died in the terrorist attack. He read the name of his father and other victims. The feeling of loss remains after 21 years, Albert said.

“The reality is that I, along with countless other children who lost parents, missed out on countless memories, moments, conversations,” he said. “So while the grief recedes a bit with time, the permanent absence of my father is just as palpable today as it ever was.”

Anthoula Katsimatides, 50, an actress and a trustee for the 9/11 Memorial and Museum, lost her brother John Katsimatides, 31, a bonds broker at Cantor Fitzgerald.

“The more the time passes, the easier it is for people to forget or to put it on the backburner,” she said.

Anthoula Katsimatides said the goal of the yearly remembrance was to “teach younger generations” in an effort to avoid a similar tragedy in the future.

“They need to know; they need to be educated,” Katsimatides said. “And then it’ll be their task to take the torch and pass it on.”