WASHINGTON >> President Joe Biden on Wednesday celebrated avoiding the “giant red wave” that many had anticipated in this week’s midterm elections and reaffirmed that he intends to run again in 2024, even as he vowed to work across the aisle with ascendant congressional Republicans. 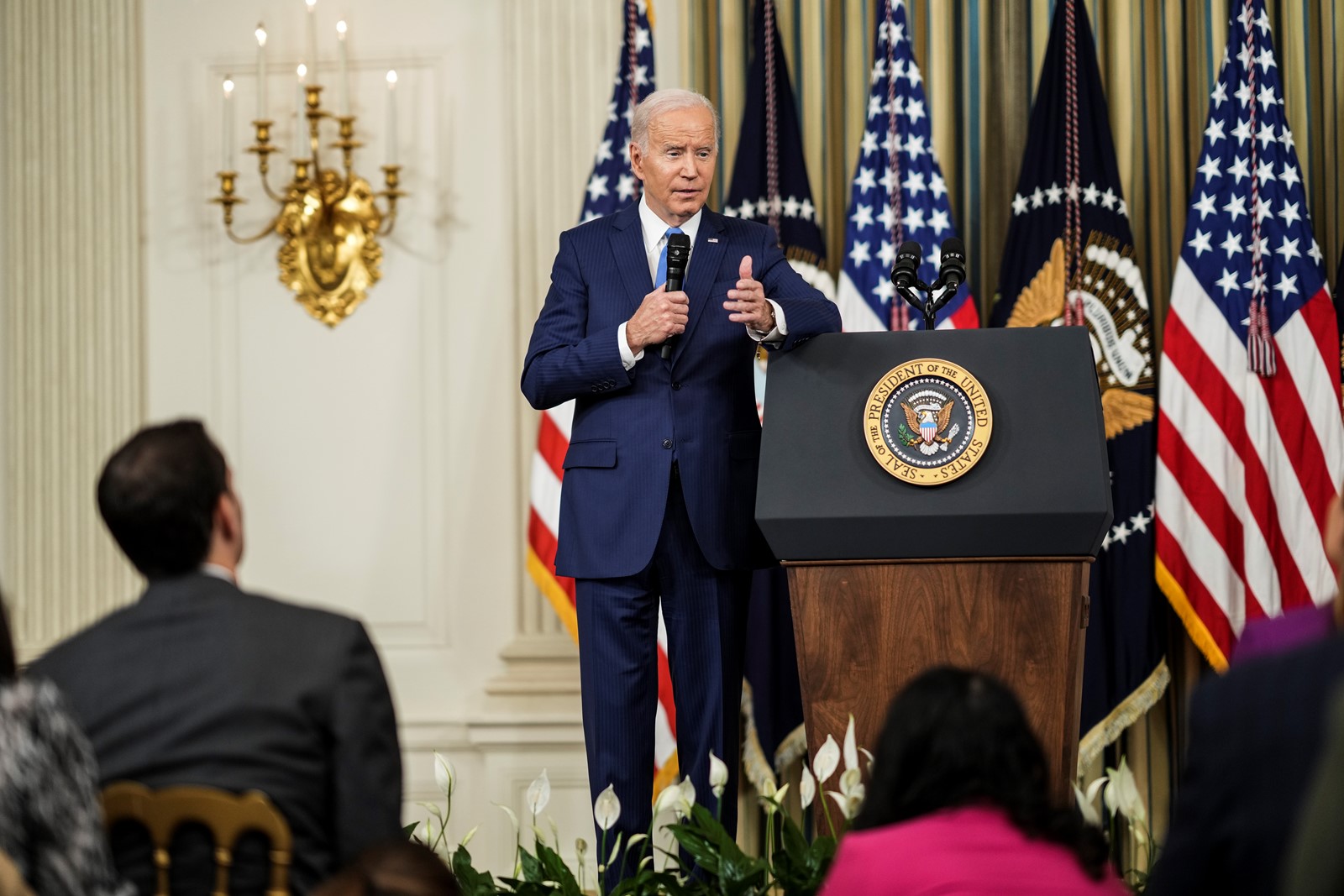 President Joe Biden delivers remarks about Election Day results and answers questions from reporters in the State Dining Room of the White House in Washington on Wednesday. Biden appeared to have the best midterms of any president in 20 years, avoiding the “shellacking” his predecessors endured, but even a narrow Republican majority could transform his presidency.

While the president appeared to have beaten the historical odds by minimizing his party’s losses, he still faced the sobering prospect of a Republican-controlled House for the next two years even if Democrats hold the Senate, jeopardizing his ambitious legislative agenda and presaging a new era of grinding conflict with subpoena-powered opponents.

But at a postelection news conference at the White House, a cheerful Biden appeared energized by the better-than-expected results, calling it “a good day for democracy” while signaling no course correction and acknowledging no mistakes.

While open to cooperation with Republicans, he defiantly said he would block any efforts by the opposition to unravel the accomplishments of his first two years.

“I have a pen that can veto,” he said, making a signing motion with his hand.

The mixed results from the midterm elections will take days or weeks to unfold as counting continues in key states and a Senate runoff looms in Georgia. It may take even longer to determine definitively what those results will mean for the rest of the Biden presidency.

By any measure, Biden scored the best midterm result of any president in 20 years, avoiding the Republican surge that many strategists in both parties predicted, even as it could leave him with a more hostile Congress and uncertain prospects for advancing his priorities for the remainder of his term.

The elections were not a clear mandate for Biden, but neither were they the repudiation that many of his predecessors endured during midterms. An aging president sometimes seen as frail and hobbled by the highest inflation in four decades, an overseas war roiling energy markets and anemic poll numbers somehow overcame expectations anyway — another chapter in Biden’s lifelong narrative of stubborn resilience in the face of adversity.

The results may encourage him to seek reelection and could for now quiet dissenting voices within his party that have been agitating for another standard-bearer in 2024 as he approaches his 80th birthday this month. He has some breathing room to think it over, even as former President Donald Trump may jump into the race as soon as next week.

Biden indicated that he would talk it over with his family during the holidays and announce a decision “early next year.”

“Our intention is to run again,” he said. “That’s been our intention regardless of what the outcome of this election was.

“This is ultimately a family decision. I think everybody wants me to run, but we’re going to have discussions about it. And I don’t feel any hurry one way or another to make that judgment, today, tomorrow, whenever, no matter what my predecessor does.”

Asked if polling that shows most voters would rather he not run again would have any influence on his decision, he said crisply, “It doesn’t.” What would be his message to the doubters? “Watch me.”

Even as the elections lifted Biden’s spirits, they undercut Trump, who watched with frustration as key allies went down to defeat and his own strongest rival for the next Republican nomination, Gov. Ron DeSantis, scored an impressive landslide victory in Florida. Exit polls showed that even a not-popular Biden retains more public support than his predecessor.

The president conceded that Trump’s supporters retain enormous influence and will be a challenge for him.

“I don’t think that we’re going to break the fever for the super-mega MAGA Republicans,” he said.

But he expressed hope that he can find common ground with the rest of the Republicans, whom he called “decent, honorable people.”

“As I have throughout my career, I’m going to continue to work across the aisle to deliver for the American people,” he said. “And it is not always easy, but we did it in the first term.”  To those Republicans planning to investigate his administration and even his family, he said, “Good luck in your senior year, as my coach used to say.”

Biden acknowledged that the midterm elections were not a sign of satisfaction by the public.

“The voters were also clear that they are still frustrated,” he said. “I get it. I understand it has been a really tough few years in this country for so many people.”

If Republicans pick up the handful of seats needed to secure the House, as currently projected, not only would they be able to block Biden’s top legislative initiatives, but they also would be empowered to try to force the president to make concessions in some policy areas through the power of the purse.

While Biden remains armed with his veto pen, as he said, the road to keeping government doors open and avoiding default on the national debt could run through Rep. Kevin McCarthy of Bakersfield, the Republican leader aiming to become speaker. Just as ominous for the White House, Rep. Jim Jordan of Ohio, the hard-charging firebrand Trump ally set to take over the House Judiciary Committee, would have subpoena power to investigate the Biden administration.

Democrats are in a better position to hold onto the Senate, but it will come down to a few outstanding races and possibly could wait until a Dec. 6 runoff election in Georgia. The loss of the Senate would not only further complicate Biden’s legislative aspirations but also hinder his efforts to confirm officials to his administration and judges to the federal bench— even possibly a Supreme Court justice, should a vacancy emerge.

The historical headwinds Biden faced as he went into Tuesday night were powerful. Only three times since the first congressional elections after World War II has inflation been as high as it is heading into a national vote — in 1974, 1978 and 1980 — and in all three cases, the party of the incumbent president lost between 15 and 48 seats in the House.

Given that history and Biden’s weak approval ratings, the possibility that the Republican pickups in the House this year could be held to about a dozen seats looked like a victory, especially compared with the losses of recent presidents. Bill Clinton’s Democrats lost 54House seats in 1994, George W. Bush’s Republicans lost 31 seats in 2006 (a “thumping,” he called it), Barack Obama’s party lost 64 seats in 2010 (a “shellacking”) and Trump’s Republicans lost 42 seats in 2018.

“The political graveyards are full of those who underestimated him,” Paul Begala, who was a top adviser to Clinton, said of Biden. “How many times in 2020 did they count him out?”

Or, he said, dismiss his chances of pushing through legislation that he eventually passed?  “Politics is an uncertain business. But one constant remains: Joe Biden will be underestimated.”

For Biden, there could be an advantage in having Republican control on Capitol Hill, enabling him to use the opposition as a foil much as Clinton and Obama did after their midterm defeats. Both of those presidents employed a mix of confrontation and compromise to rebound from those losses and go on to win reelection two years later.

As it stands, Biden already has a lot of work to be done, without Congress, just putting into effect the legislation he passed in his first two years — including trillions of dollars in spending on infrastructure, climate change, health care, manufacturing and other areas. As aides envision it, Biden could spend much of the next two years crisscrossing the country for ribbon-cutting ceremonies.

But the confrontation part of the Clinton-Obama strategy may yet be the formula he turns to.

“In terms of Biden’s hopes of getting reelected, he knows from experience that losing a midterm election positions the president to become a counterpuncher — as Obama did in2011-2012 and Clinton did in 1995-1996,” said Michael Nelson, a political science professor at Rhodes College and author of several books on modern presidents. “It would help if the Republicans overplayed their hand as they did in those two prior cases.”