Mnuchin: Stimulus Payments Will Be Deposited in Americans’ Bank Accounts Next Week 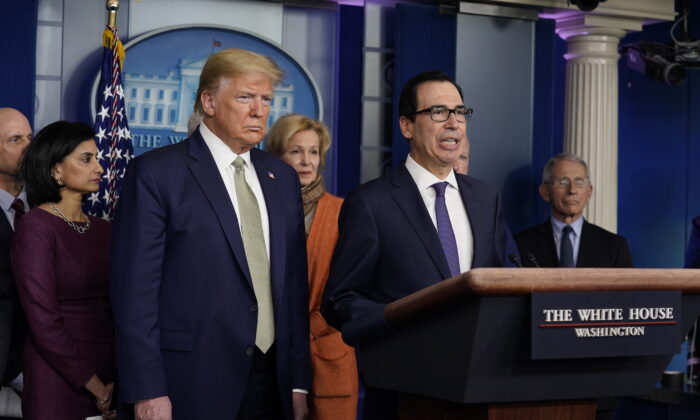 Treasury Secretary Steven Mnuchin speaks during a press briefing with the coronavirus task force as President Donald Trump looks on, at the White House, in Washington, on March 17, 2020. (Evan Vucci/AP Photo)

Treasury Secretary Steven Mnuchin said Monday that the federal government will deposit the stimulus payments into bank accounts next week, as included in the approximately $900 billion CCP virus package that Congress is expected to pass Monday.

“The good news is this is a very, very fast way of getting money into the economy. Let me emphasize: People are going to see this money at the beginning of next week,” Mnuchin said in an interview on CNBC on Monday morning.

“People go out and spend this money and that helps small business and that helps getting more people back to work,” he continued. “So it’s very fast, it’s money that gets recirculated in the economy.”

Last night, Senate Majority Leader Mitch McConnell (R-Ky.) announced a deal was reached between the four leaders of the House and Senate.

Mnuchin said that he favored a more targeted approach that focused on boosting industries hit by the pandemic.

“Unemployment has come way down,” Mnuchin said in the interview on Monday. “This is now much more targeted. I expect it’s needed in a short period of time, and I think this will take us through the recovery.”

In March, Congress passed the CARES Act that deposited $1,200 payments for adults and $500 payments for children. Now, under the latest bill, individuals will reportedly $600 in direct payments, and children will receive $600 payments, meaning that a family of four could get up to $2,400.

Sen. John Barrasso (R-Wyo.) said on Sunday that the final deal would include direct $600 payments and an extension of the small business loan program, known as the Payment Protection Program, that was set up during the CARES Act in March. “It’s a little more specific this time in that the business has to be fewer than 300 employees, and they have to actually show a loss,” he told Fox News.

Regarding the stimulus payments, President Donald Trump called on Congress to increase the amount.

“Why isn’t Congress giving our people a Stimulus Bill?” the president asked on Twitter on Dec. 19. “It wasn’t their fault, it was the fault of China,” he added, referring to the CCP virus, which caused a worldwide pandemic. “GET IT DONE, and give them more money in direct payments.”

On Sunday night, McConnell tweeted that “as the American people continue battling the coronavirus this holiday season, they will not be on their own. Congress has just reached an agreement. We will pass another rescue package ASAP. More help is on the way.”

McConnell, on Twitter and when he delivered his remarks on the Senate floor, offered few details about the measure.

“The four leaders of the Senate and the House finalized an agreement,” McConnell told other senators on Sunday.