A grocery staple that for decades has been a relatively cheap and reliable item has now become an elusive and even lavishly priced commodity.

At a Whole Foods in New York City on Wednesday, shelves were empty for the cheapest eggs— $3.39 for a carton of 12 large brown Grade A eggs.

What remained were more expensive options like organic, cage-free eggs for more than $7. Even then, the customers were limited to two egg cartons, according to a sign on the refrigerator door, “due to a nationwide shortage of eggs.” Other grocery stores, such as certain locations of Kroger across the United States and Lidl in Britain, have also limited egg purchases. Prices of eggs across some countries are rising sharply.

One factor behind the shortage and the sharp rise in egg prices is an outbreak of avian influenza, also known as the bird flu, a highly contagious virus that is often fatal to chickens. Since the outbreak was detected last February, more than 57 million birds in hundreds of commercial and backyard flocks have been affected by it, according to the U.S. Department of Agriculture.

Infected or exposed flocks are culled to prevent the virus from spreading, a measure that has resulted in the depopulation of more than 44 million laying hens in the U.S. since the outbreak, according to the Agriculture Department. The depopulations at commercial facilities have decreased the domestic egg supply by about 7.5% on average each month since the outbreak began, the department said.

Lyndsay Cole, a spokesperson with the Agriculture Department’s Animal and Plant Health Inspection Service, said that after facilities are sanitized and restocked with healthy laying hens, it takes about four to five months for them to “reach peak productivity” of about 24eggs per month.

The virus has also been detected around the world, including in Canada and countries in Europe and South America, according to United Egg Producers, the trade group that represents most commercial egg farmers in the United States. 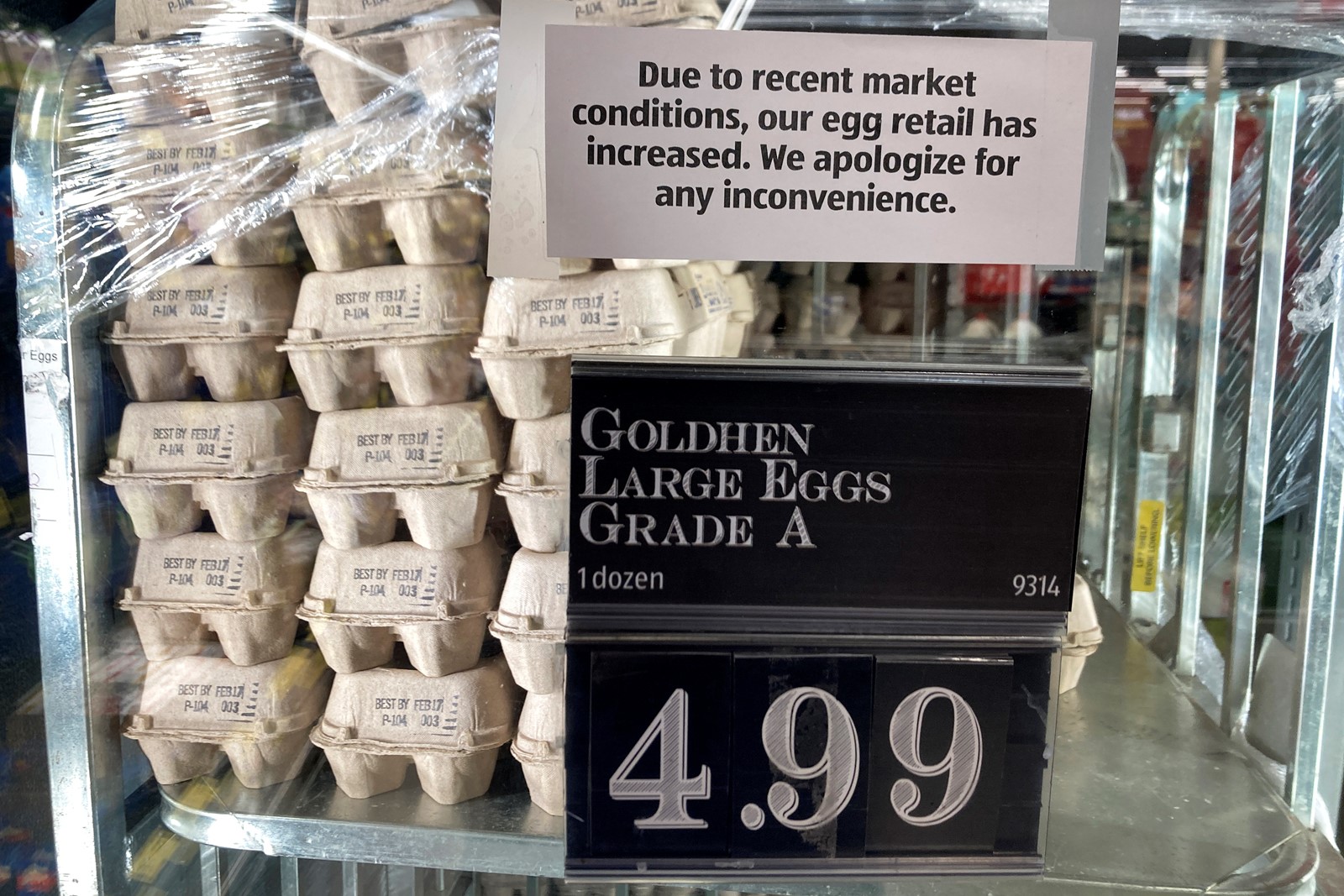 A grocery store in Cheverly, Md., posts a sign to apologize for the increased price of their eggs Tuesday. SUSAN WALSH – THE ASSOCIATED PRESS

Emily Metz, president and CEO of the American Egg Board, said in an interview Wednesday that while bird flu has played a role, increasing costs of fuel, feed and packaging have also contributed to pricier and scarcer eggs.

“Is avian flu a factor? Yes,” Metz said. “Is it the only factor? No, and I would argue it’s not even the biggest factor in where these prices are right now.”

Combined, the avian flu and other rising costs have created scenes of empty shelves at grocery stores across the country, from Colorado to New York. In some instances, people have resorted to buying their own chickens, local media in Arizona and Massachusetts have reported.

While the shortages have not been dire, the jump in prices is noticeable for consumers and businesses. In January 2022, the average price for a dozen of large Grade A eggs in the U.S. was $1.39, according to the Bureau of Labor Statistics. By November, the average price had increased to $3.59.

Ben Suh, the owner of Between the Bagel NY in Queens, said that he had tried to hold off on raising prices for as long as he could but that he would soon increase the cost of menu items with eggs. For instance, the price of a bacon, egg and cheese sandwich will increase to $7 from $6, Suh said.

“Everyone’s been struggling since the pandemic began, so we’ve been trying to keep our prices down,” Suh said.

“Everything’s doubled,” Suh said, adding that because of inflation, he has also had to pay more for other products, including bacon and coffee.

At Brey’s Egg Farm in Jeffersonville, New York, flocks of chickens have been spared from the avian flu. Daniel Brey, the farm’s owner, said that after a destructive nationwide avian flu outbreak in 2014 and 2015 killed more than 50 million birds, he set up a gate around his farm to prevent wild birds from entering and potentially spreading diseases.

Brey said that vehicles entering the farm were sprayed with disinfectant, another precaution to protect the farm, which produces 228,000 eggs daily.

“This stuff is so contagious,” Brey said of the bird flu. “You’ve got to be careful everywhere.”

While the avian flu rarely infects humans, according to the Centers for Disease Control and Prevention, the contagiousness of the virus requires farmers to quickly euthanize infected and exposed flocks.

“This virus is fatal,” Metz said. “Once it comes into contact with your flock, it will kill your birds.”

Because there have been fewer reported cases of avian flu at commercial egg-laying facilities in recent weeks, Brey said that he believed the egg shortage would ease soon, as well as the high prices. But Brey said he was concerned that cases could rebound in the spring and spread to other birds, such as geese, ducks, hawks and eagles.

So far this year, recorded cases of the avian flu dropped significantly, with only one commercial flock and 10 backyard flocks affected, according to the Agriculture Department, compared with more than 5.07 million birds in December and more than 3.75 million birds in November.

A statement last week from United Egg Producers echoed that assessment, saying that there was an expected lull in the virus over the next two months, but the group warned of “detections rapidly increasing as spring and the migration season renews.”

Cole said that as farms restocked, supply would likely improve, but she cautioned that the virus was still lingering within the United States.

“We know there will continue to be a threat to domestic birds as long as the HPAI virus is circulating in wild birds, so all bird owners should continue to be vigilant,” Cole said, referring to the avian virus.