POKHARA, Nepal >> A plane making a 27-minute flight to a Nepal tourist town crashed into a gorge Sunday while attempting to land at a newly opened airport, killing at least 68 of the72 people aboard. At least one witness reported hearing cries for help from within the fiery wreck, the country’s deadliest airplane accident in three decades.

Hours after dark, scores of onlookers crowded around the crash site near the airport in the resort town of Pokhara as rescue workers combed the wreckage on the edge of the cliff and in the ravine below. 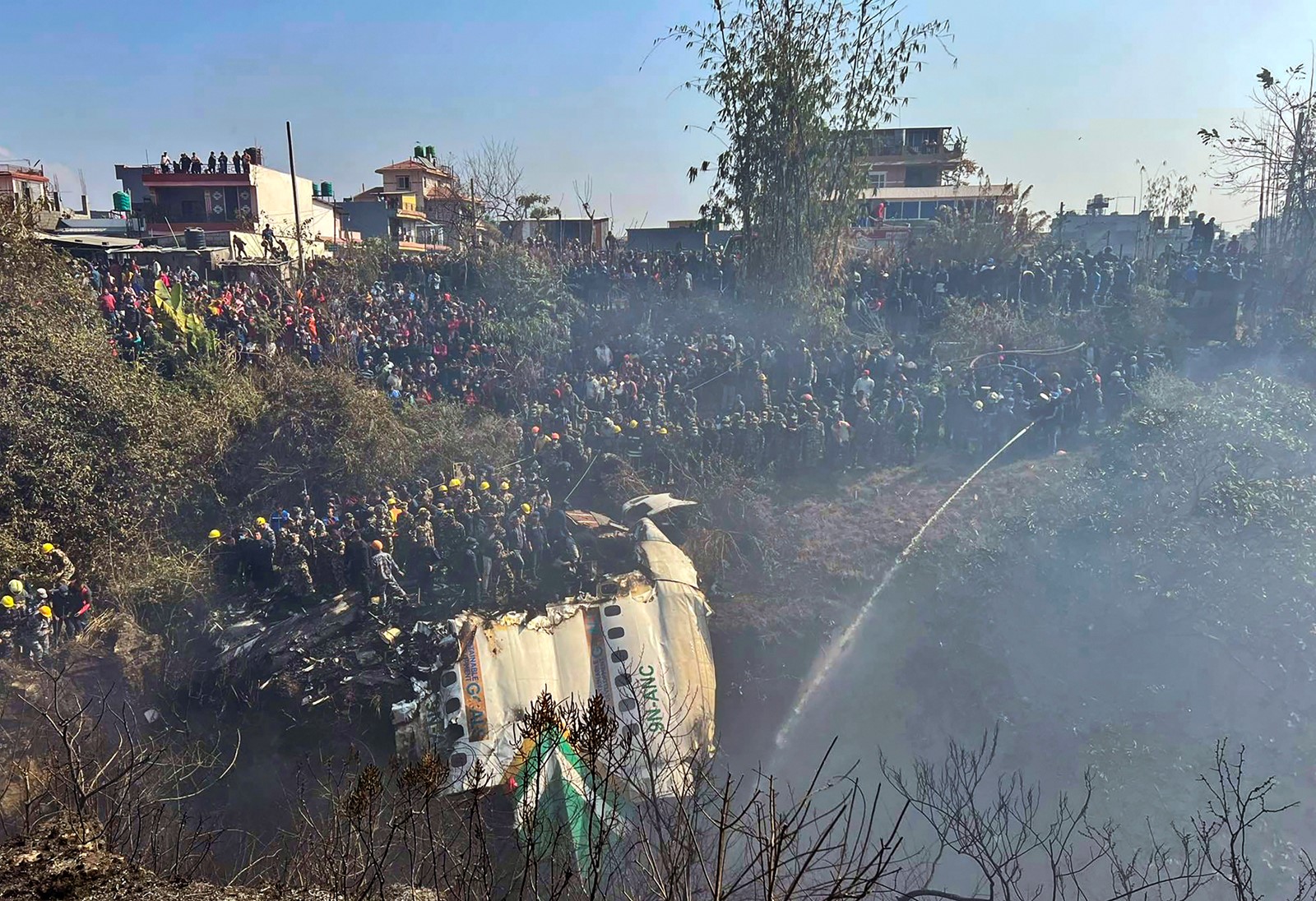 Locals crowd around the wreckage of a passenger plane as rescuers are scouring the crash site in Pokhara, Nepal, on Sunday. KRISHNA MANI BARAL — THE ASSOCIATEDPRESS

Officials suspended the search for the four missing people overnight and planned to resume looking today.

Local resident Bishnu Tiwari, who rushed to the crash site near the Seti River to help search for bodies, said the rescue efforts were hampered by thick smoke and a raging fire.

“The flames were so hot that we couldn’t go near the wreckage. I heard a man crying for help, but because of the flames and smoke we couldn’t help him,” Tiwari said.

It was not immediately clear what caused the accident, Nepal’s Civil Aviation Authority said.

A witness said he saw the aircraft spinning violently in the air after it began descending to land, watching from the terrace of his house. Finally, Gaurav Gurung said, the plane fell nose-first towards its left and crashed into the gorge.

The aviation authority said the aircraft last made contact with the airport from near Seti Gorge at 10:50 a.m. before crashing.

The twin-engine ATR 72 aircraft, operated by Nepal’s Yeti Airlines, was flying from the capital, Kathmandu, to Pokhara, located 200 kilometers (125 miles) west. It was carrying 68 passengers including 15 foreign nationals, as well as four crew members, Nepal’s Civil Aviation Authority said in a statement. The foreigners included five Indians, four Russians, two South Koreans, and one each from Ireland, Australia, Argentina and France.

Images and videos shared on Twitter showed plumes of smoke billowing from the crash site, about 1.6 kilometers (nearly a mile) away from Pokhara International Airport. The aircraft’s fuselage was split into multiple parts that were scattered down the gorge.

Firefighters carried bodies, some burned beyond recognition, to hospitals where grief-stricken relatives had assembled.

At Kathmandu airport, family members appeared distraught as they were escorted in and at times exchanged heated words with officials as they waited for information.