By Vasilisa Stepanenko | The Associated Press

PRZEWODOW, Poland >> NATO member Poland and the head of the military alliance both said Wednesday that a missile strike in Polish farmland that killed two people appeared to be unintentional and probably was launched by air defenses in neighboring Ukraine. Russia had been bombarding Ukraine at the time in an attack that savaged its power grid.

“Ukraine’s defense was launching their missiles in various directions, and it is highly probable that one of these missiles unfortunately fell on Polish territory,” said Polish President Andrzej Duda. “There is nothing, absolutely nothing, to suggest that it was an intentional attack on Poland.” 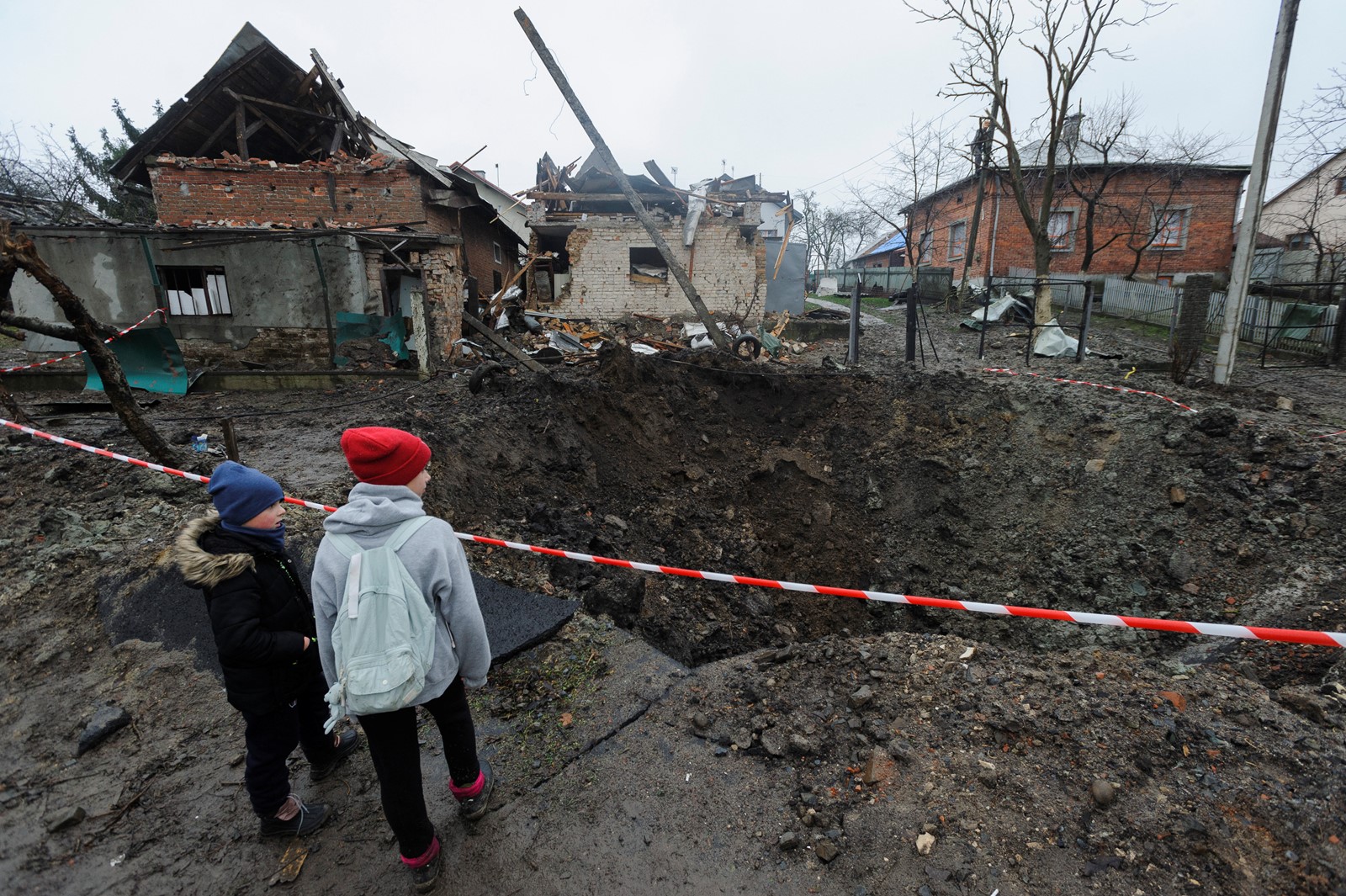 Children look at a crater created by an explosion in a residential area after Russian shelling in Solonka, Lviv region, Ukraine, Wednesday. MYKOLA TYS — THEASSOCIATED PRESS

NATO Secretary-General Jens Stoltenberg, at a meeting of the 30-nation military alliance in Brussels, echoed the preliminary Polish findings. Ukrainian President Volodymyr Zelenskyy, however, disputed them and asked for further investigation.

The assessments of Tuesday’s deadly missile landing appeared to dial back the likelihood of the strike triggering another major escalation in the nearly 9-month-old Russian invasion of Ukraine. If Russia had targeted Poland, that could have risked drawing NATO into the conflict.

Still, Stoltenberg and others laid overall but not specific blame on Russian President Vladimir Putin’s war.

Zelenskyy told reporters he had “no doubts” about a report he received from his top commanders “that it wasn’t our missile or our missile strike.” Ukrainian officials should have access to the site and take part in the investigation, he added.

“Let’s say openly, if, God forbid, some remnant (of Ukraine’s air defenses) killed a person, these people, then we need to apologize,” he said. “But first there needs to be a probe, access — we want to get the data you have.”

On Tuesday, he called the strike “a very significant escalation.”

Before the Polish and NATO assessments, U.S. President Joe Biden had said it was “unlikely” that Russia fi red the missile but added, “I’m going to make sure we find out exactly what happened.”

A Russian Defense Ministry spokesman in Moscow said no Russian strike Tuesday was closer than 22 miles from the Ukraine-Poland border. The Kremlin denounced Poland’s and other countries’ initial response and, in rare praise for a U.S. leader, hailed Biden’s“ restrained, much more professional reaction.”

“We have witnessed another hysterical, frenzied, Russo-phobic reaction that was not based on any real data,” Kremlin spokesman Dmitry Peskov said.

The Polish president said the missile was probably a Russian-made S-300 dating from the Soviet era. Ukraine, once part of the Soviet Union, fi elds Soviet- and Russian-made weaponry and has seized many more Russian weapons while beating back the Kremlin’s invasion forces.

Russia’s assault on power generation and transmission facilities Tuesday included Ukraine’s western region bordering Poland. Ukraine’s military said 77 of the more than 90missiles fired were brought down by air defenses, along with 11 drones.

The countrywide bombardment by cruise missiles and exploding drones clouded the initial picture of what happened in Poland.

“It was a huge blast, the sound was terrifying.” said Ewa Byra, the primary school director in the eastern village of Przewodow, where the missile struck. She said she knew both men who were killed — one was the husband of a school employee, the other the father of a former pupil.

Another resident, 24-year-old Kinga Kancir, said the men worked at a grain-drying facility.

“It is very hard to accept,” she said. “Nothing was going on and, all of a sudden, there is a world sensation.”

In Europe, NATO members called for a thorough investigation and criticized Moscow.

“This wouldn’t have happened without the Russian war against Ukraine, without the missiles that are now being fi red at Ukrainian infrastructure intensively and on a largescale,” said German Chancellor Olaf Scholz.

Swaths of Ukraine were without power after the aerial assault. Zelenskyy said about 10million people lost electricity, but tweeted overnight that 8 million subsequently were reconnected. Previous strikes already had destroyed an estimated 40% of the country’s energy infrastructure.

Ukraine said the bombardment was the largest on its power grid so far.

A Washington-based think tank, the Institute for the Study of War, said Ukraine’s downing of so many Russian missiles Tuesday “illustrates the improvement in Ukrainian air defenses in the last month,” which are being bolstered with Western-supplied systems.  Sweden said Wednesday that an air defense system with ammunition would form part of its latest and largest package of military and humanitarian aid to Ukraine, worth $360 million.