With four days to go until Election Day, President Joe Biden visited Southern California for a rally in support of Rep. Mike Levin.

The president stopped by MiraCosta College in Oceanside on a brisk and windy Thursday evening for a Get Out the Vote rally hosted by Levin. This is Biden’s second trip to Southern California in as many months; he visited Los Angeles and Irvine in October. 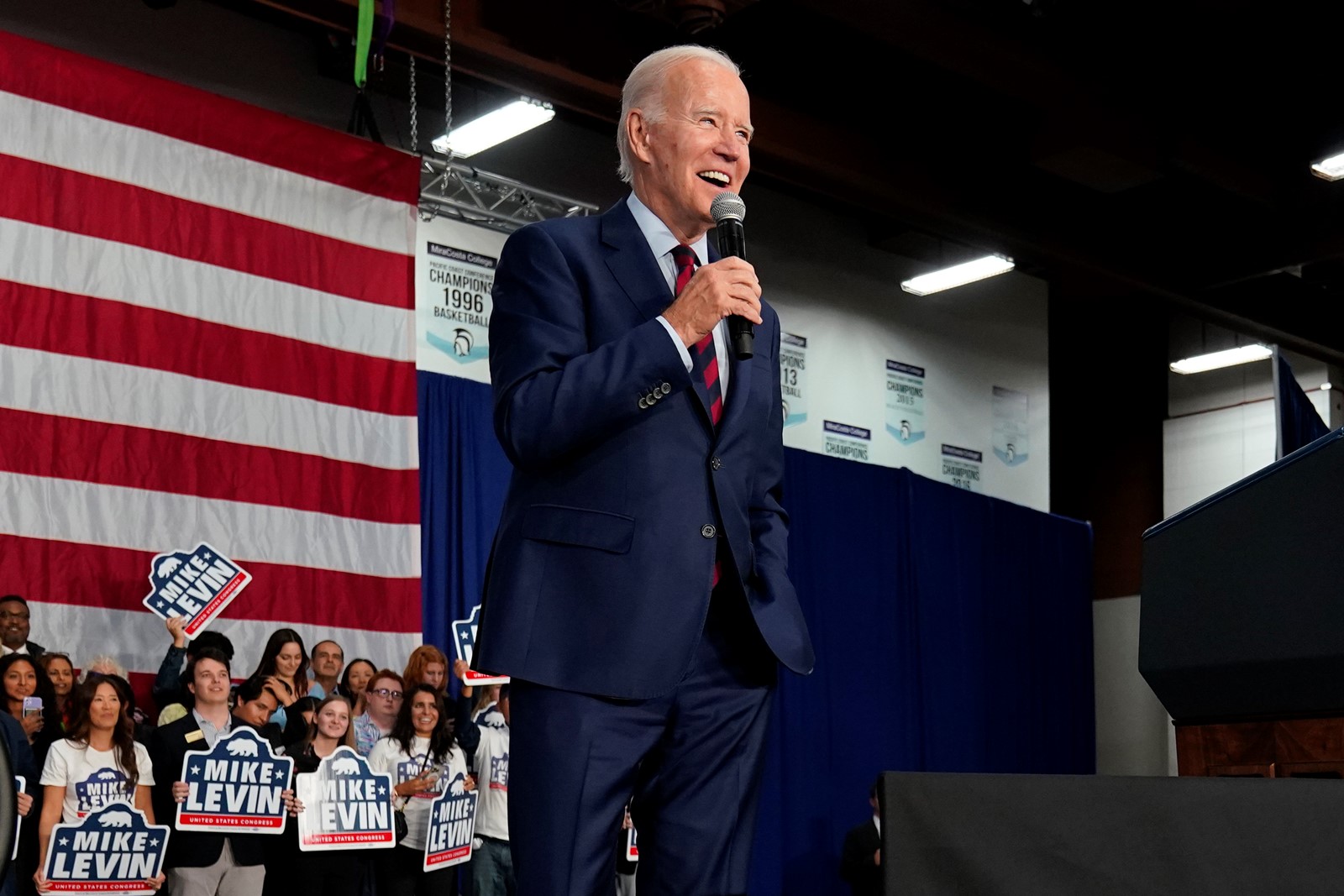 Demonstrators — at least a few dozen who wanted to bring attention to human rights violations in Iran as well as others who support former President Donald Trump — lined the winding drive up to MiraCosta College ahead of the event.

But Eloise Teymourian, from Carlsbad, was one of a few hundred people who attended the rally. Noting she supports the president’s values, Teymourian said she’s already voted —and encouraged everyone in her house to vote as well.

Levin, a Democrat from San Juan Capistrano, faces Republican businessman Brian Maryottin what is expected to be a tight contest for CA-49.

The race for the coastal seat — which includes parts of San Diego and Orange counties, including Dana Point and San Clemente — is ranked a toss-up by Cook Political Report. And Inside Elections recently moved it from “Lean Democrat” to “Tilt Democrat.”

“As summer turned to fall, the political winds generally shifted to the Republicans’ benefit.  Several Democratic incumbents who had leads in August are now in incredibly competitive areas,” said Dr. Matthew Beckmann, a professor of political science at UC Irvine.

“These endgame rallies by President Biden are not designed to change minds so much as to rally partisans,” Beckmann added. “President Biden’s goal is to remind Democratic voters why they are Democrats and should turn out to vote for Democrats.”

Levin, drawing much applause during his speech, encouraged those in attendance to vote.

“These last four years, you’ve seen our country experience changes and threats that you once would have never considered possible,” Levin said.

While Levin flagged issues like abortion rights and gun control as issues he’s focused on, Maryott has pointed to inflation as the biggest concern he’s heard from voters as he has campaigned.

“We need to get government back on the sidelines where it belongs. A guardrail here and a helping hand there, of course, but not like Rep. Levin or President Biden are trying to pile on us,” Maryott said in an SCNG questionnaire. “Let people and free markets take over again, and inflation will settle down.”

Megan House, a spokeswoman for the Maryott campaign, said Biden’s visit “is a failed president coming to our district to stand alongside a failed congressman. Neither of them has made life better for the people of the 49th district; in fact, life has gotten much harder as a result.”

Masha Townsend, an Orange County resident who traveled about an hour to demonstrate outside the event Thursday, said she wanted to show her “support (for) the Iranian people fighting for freedom.”

“We want President Biden to listen to our calls for action,” Townsend, who is Iranian, said.  Specifically, she called for the Biden administration to seize the assets of Islamic Republic leaders, pull out of the Iran nuclear deal, and “support this revolution and facilitate a regime change that will be replaced with a democratically elected secular government.”

Last month, Biden stumped in Los Angeles and Orange counties. Although his trip was billed as a bid to tout the administration’s efforts to combat inflation, slash the cost of prescription drugs, and boost infrastructure across the country, the president also took time to praise LA mayoral candidate Karen Bass and Rep. Katie Porter, who is running for re-election in the House seat just north of Levin’s.

“Our four competitive Orange County races are the pathway to keeping the House,” said Ada Briceño, chair of the Democratic Party of Orange County. “Our national Democrats know this and are investing in Orange County in this election as I know they will in elections to come.”

Earlier Thursday, Biden was in New Mexico to campaign for Gov. Michelle Lujan Grisham.  He flew into Marine Corps Air Station Miramar in San Diego where he was met by Gov. Gavin Newsom.

Just a day prior, Biden condemned political violence and intimidation in a speech hosted by the DNC in Washington, D.C. Biden juxtaposed the recent attack on Paul Pelosi, the husband of House Speaker Nancy Pelosi, with the Jan. 6 insurrection. The assailant allegedly said, “Where’s Nancy?” after breaking into the Pelosis’ San Francisco home — a similar refrain to that uttered by those who broke into the U.S. Capitol on Jan. 6, 2021.

MiraCosta is a community college with campuses in Oceanside and Cardiff. Ahead of the event, the school said it “anticipate(s) the highest of mitigation measures to minimize any disruption to our college community, although we do expect additional folks on campus in the early evening hours on Thursday.”