Mourners wait in line for hours to stand for a few moments before her coffin. 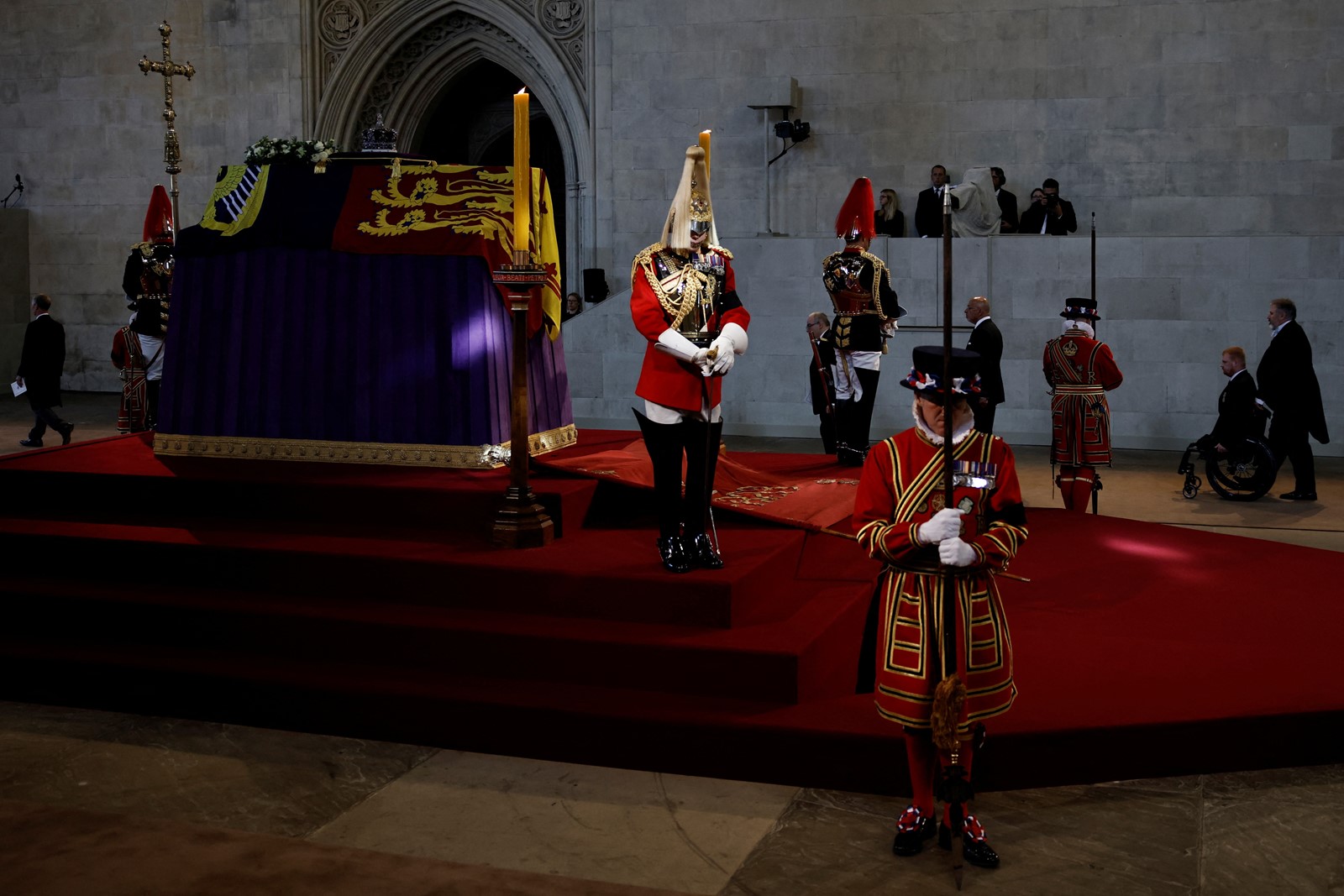 Members of the Royal Guard stand next to the coffin of Britain’s Queen Elizabeth II on Wednesday as it arrived at Westminster Hall from Buckingham Palace. The queen will continue to lie in state until her funeral Monday in London. ALKIS KONSTANTINIDIS —WPA POOL/GETTY IMAGES

LONDON >> The coffin of Queen Elizabeth II left Buckingham Palace for the last time Wednesday, borne on a horse-drawn carriage and saluted by cannons and the tolling of Big Ben, in a solemn procession through the flag-draped, crowd-lined streets of London to Westminster Hall. There, a steady stream of mourners paid their respects to Britain’s longest-reigning monarch.

As the cortege left the palace, her son, King Charles III, and his siblings and sons marched behind the coffin, which was topped by a wreath of white roses and her crown resting on a purple velvet pillow.

The military procession underscored Elizabeth’s seven decades as head of state as the national mourning process shifted to the grand boulevards and historic landmarks of the U.K. capital.

At 900-year-old Westminster Hall, where the queen will lie in state until her funeral Monday, crowds shuffled past her coffin well into the night. They moved silently down the steps of the hall under a great stained-glass window, then past the coffin that was covered with the Royal Standard and had been placed on a raised platform known as a catafalque by eight pallbearers. 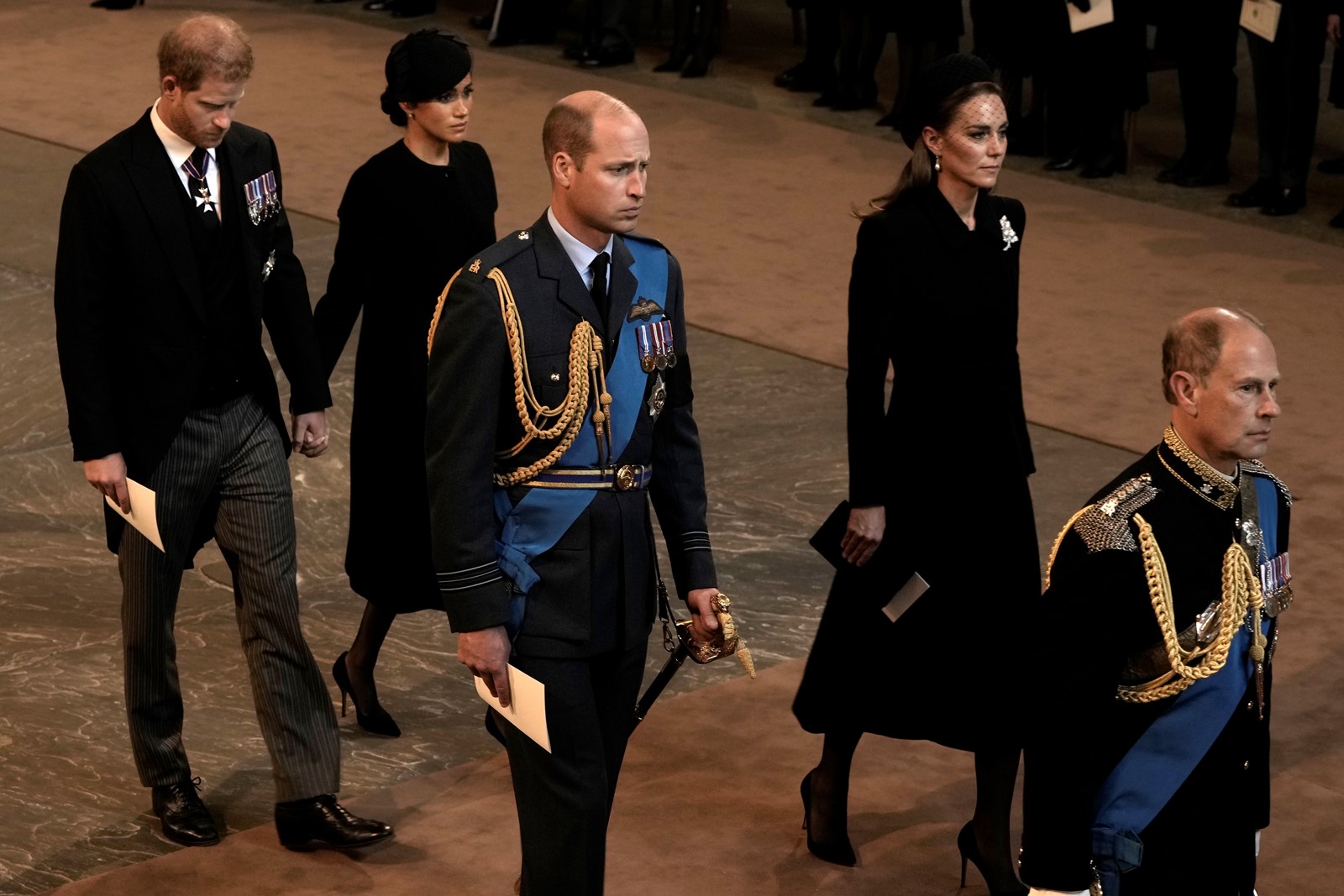 There were couples and parents with children, veterans with medals clinking on navy blue blazers, lawmakers and members of the House of Lords. Some wore black or suits and ties, others jeans and sneakers, and all had waited hours to stand in front of the coffin for a few moments.

Many bowed or curtseyed and some were in tears.

Thousands who had waited for the procession for hours along The Mall outside the palace and other locations along the route held up phones and cameras, and some wiped away tears, as the casket rolled by. Applause broke out as it passed through Horse Guards Parade. Thousands more in nearby Hyde Park watched on large screens.

The coffin was topped with the Imperial State Crown — encrusted with almost 3,000 diamonds — and a bouquet of flowers and plants, including pine from the Balmoral Estate, where Elizabeth died on Sept. 8 at the age of 96.

Two officers and 32 troops from the 1st Battalion Grenadier Guards in red uniforms and bearskin hats walked on either side of the gun carriage. The 38-minute procession ended at Westminster Hall, where Archbishop of Canterbury Justin Welby led a service attended by Charles and other royals.

“Let not your heart be troubled: ye believe in God, believe also in me. In my Father’s house are many mansions: if it were not so, I would have told you,” Welby read from the Book of John.

After a short service, the captain of The Queen’s Company 1st Battalion Grenadier Guards, assisted by a senior sergeant, laid the royal standard of the regiment on the steps of the catafalque.

Four officers from the Household Cavalry — two from the Life Guards and two from the Blues Royals — began the vigil, taking their places at each corner and bowing their heads.

Thousands had queued up along the banks of the River Thames, waiting to enter the hall and pay their respects to the only monarch most Britons have ever known after her 70 years on the throne.

Esther Ravenor, a Kenyan who lives in the U.K. said she was humbled as she watched the procession.

“I love the queen, I love the royal family, and you know, I had to be here,” she said. “She is a true role model. She loved us all, all of us. Especially someone like me, a migrant woman coming to the U.K. 30 years ago, I was allowed to be here and to be free and safe, so I really honor her. She was a big part of my life.”

Maj. Gen. Christopher Ghika, of the Household division, who organized the ceremonial aspects of the queen’s funeral, said it was “our last opportunity to do our duty for the queen, and it’s our first opportunity to do it for the king, and that makes us all very proud.”

Troops involved in the procession had been preparing since the queen died. So had the horses of the King’s Troop Royal Horse Artillery.

Sgt. Tom Jenks said the horses were specially trained, including how to handle weeping mourners, as well as flowers and flags being tossed in front of the procession.

Biden recalled “the Queen’s kindness and hospitality” she hosted them and the first lady at Windsor Castle in June, the statement said. “He also conveyed the great admiration of the American people for the Queen, whose dignity and constancy deepened the enduring friendship and special relationship between the United States and the United Kingdom.”

Crowds have lined the route of the queen’s coffin whenever it has been moved in its long journey from Scotland to London.

On Tuesday night, thousands braved a typical London drizzle as the hearse, with interior lights illuminating the casket, drove slowly from an air base to Buckingham Palace.

Earlier, in Edinburgh, about 33,000 people fi led silently past her coffin in 24 hours at St. Giles’ Cathedral.

The line of people snaking along the banks of the River Thames to enter Westminster Hall, the oldest building in Parliament, was nearly 3 miles long in the afternoon, according to a government tracker.

The hall is where Guy Fawkes and Charles I were tried, where kings and queens hosted magnificent medieval banquets, and where ceremonial addresses were presented to Queen Elizabeth II during her silver, golden and diamond jubilees.

Chris Bond, from Truro in southwest England, was among those waiting to see the queen’s coffin. He also attended the lying in state of the queen’s mother in 2002.

“Obviously, it’s quite difficult queuing all day long, but when you walk through those doors into Westminster Hall, that marvelous, historic building, there was a great sense of hush and one was told you take as much time as you like, and it’s just amazing,” he said.

“We know the queen was a good age and she served the country a long time, but we hoped this day would never come,” he added.

Chris Imafidon, secured the sixth place in the queue.

“I have 1,001 emotions when I see her,” he said. “I want to say, God, she was an angel, because she touched many good people and did so many good things.”