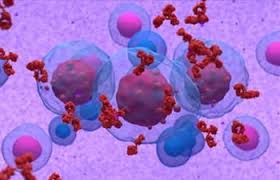 DEAR DR. ROACH >> Would it be possible for you to explain my recent diagnosis of monoclonal gammopathy of uncertain significance (MGUS)? Apparently, 3% to 5% of the population over the age of 50 show this blood abnormality. My last M-Spike result was 0.2g/dL.

Dear A.M.P.>> By definition, MGUS has no symptoms, so many people get the diagnosis made when blood testing for something else shows this result. You are right that MGUS is a common (over 3% of the population) blood finding of abnormally large amounts of antibodies in the blood.

Antibodies are good when they protect you from infection, but excess antibody levels (these are “monoclonal,” meaning they only block one antigen and are probably no help at all in preventing infection) are a risk factor for development of blood cancers — especially multiple myeloma, but some less-common blood diseases as well. Roughly 1% of people with MGUS will develop one of these advanced diseases per year.

As a result, there is a small, decreased life expectancy in people with MGUS. People with MGUS are usually recommended to have an exam as well as blood and urine testing every year to look for evidence of progression. One important blood test is the M-protein blood level. People with an M-protein result above 1.5 g/dL are at higher risk for progression; fortunately, you are well below this number.

In addition to the M-protein level, the type of antibody matters. IgG has the best prognosis, compared with IgM, IgA and IgD.  A third prognostic factor is what’s called the “light chains” of the antibody molecule, kappa and lambda. Abnormal proportions of these also have a worse prognosis.

Over 20 years, people with all three risk factors have more than a 50% risk of developing a blood cancer, while only 5% of people with no risk factors will see progression during the same 20 years. There is no treatment known to prevent progression, which can occur quickly sometimes, so everybody with MGUS (but especially those at higher risk) should know the symptoms of blood cancers, the most important being fatigue or weakness, bone pain, weight loss or fever, and abnormal bleeding.

DEAR DR. ROACH >> I get eye migraines. What causes these? Can they be eliminated or at least managed?

Dear C.P. >> Migraines often affect vision. Many people with migraines get an “aura” of visual changes that precede a headache (or can sometimes occur by themselves without a headache). The aura may consist of blinking or flashing lights or may produce blind spots in both eyes.

A retinal migraine is a different and rare condition affecting one eye where the person gets vision loss, which can sometimes be permanent.

What causes migraines still isn’t exactly known, but it involves abnormal electrical activity (called “cortical spreading depression”) in the nerve cells of the brain, and inflammation in the lining of the brain.

Most people with migraines can be managed. There are treatments to stop an attack acutely (such as the “triptans”) as well as medicines to try to prevent them from coming on in the first place. Most regular doctors have experience treating migraines, but neurologists are the real experts and should be consulted if standard treatments are ineffective.