By Eva Fu | The Epoch Times 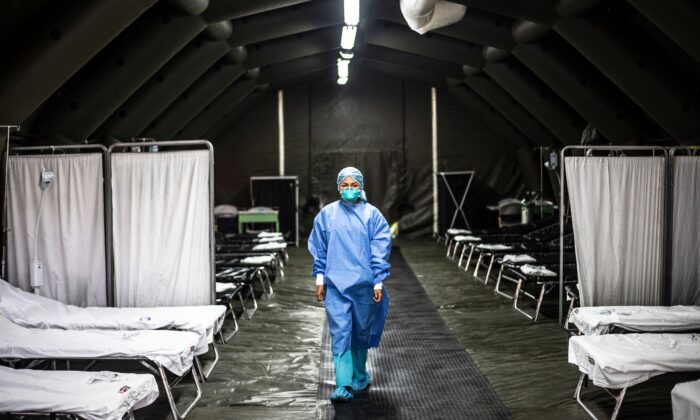 A health professional in a unit set up for CCP virus patients in Lima, Peru, on Feb. 27, 2020. Internal documents reveal that Beijing knew by then of suspected cases dating back to September 2019, but didn't tell the world. (Hung Sung-Jun/Getty Images)

A series of leaked documents shows that patients in China with symptoms similar to COVID-19 were hospitalized months before the regime’s official timeline, throwing into question when exactly the CCP virus began spreading in Wuhan, China’s epidemic ground zero.

At least one patient with COVID-19-like symptoms started experiencing symptoms in September 2019, according to hospital data obtained by The Epoch Times from a trusted source who has access to government documents. Dozens more were hospitalized over the following month.

The city’s health commission only publicly announced an outbreak of a novel form of pneumonia on Dec. 31, 2019—after social media posts by whistleblower doctors had gone viral.

In a letter dated Feb. 19 obtained by The Epoch Times, a national investigation team set up by the central government stated that it wished to trace early cases of the disease. It asked local authorities for data from all Wuhan medical institutions over the period between Oct. 1 to Dec. 10, 2019, including information on patients who visited fever clinics in the vicinity of the Huanan Seafood Market, a wet market that the officials initially identified as the outbreak origin; details of the earliest 10 suspected cases at each medical agency rated tier two or above (three is the highest); and pneumonia deaths with COVID-19-like symptoms.

The letter stated that nine hospitals, which received the most COVID-19 patients in the city, were key to the investigation.

The Epoch Times had access to part of the records in response to the inquiry, those from 11 hospitals.

Despite the collected data, the Wuhan outbreak control task force told media on Feb. 26 that the earliest documented patient was a person surnamed Chen who fell ill on Dec. 8, 2019.

It’s unclear whether authorities conducted any inquiries into early cases prior to February.

To some critics, the investigation appeared rather narrow and came too late. “For such a massive respiratory disease to break out in the area, how come they didn’t track down all other hospitals?” Sean Lin, former lab director of the viral disease branch at the Walter Reed Army Institute of Research, told The Epoch Times.

“This should have been done a long time ago,” he said, calling the delayed inquiry “ridiculous.” 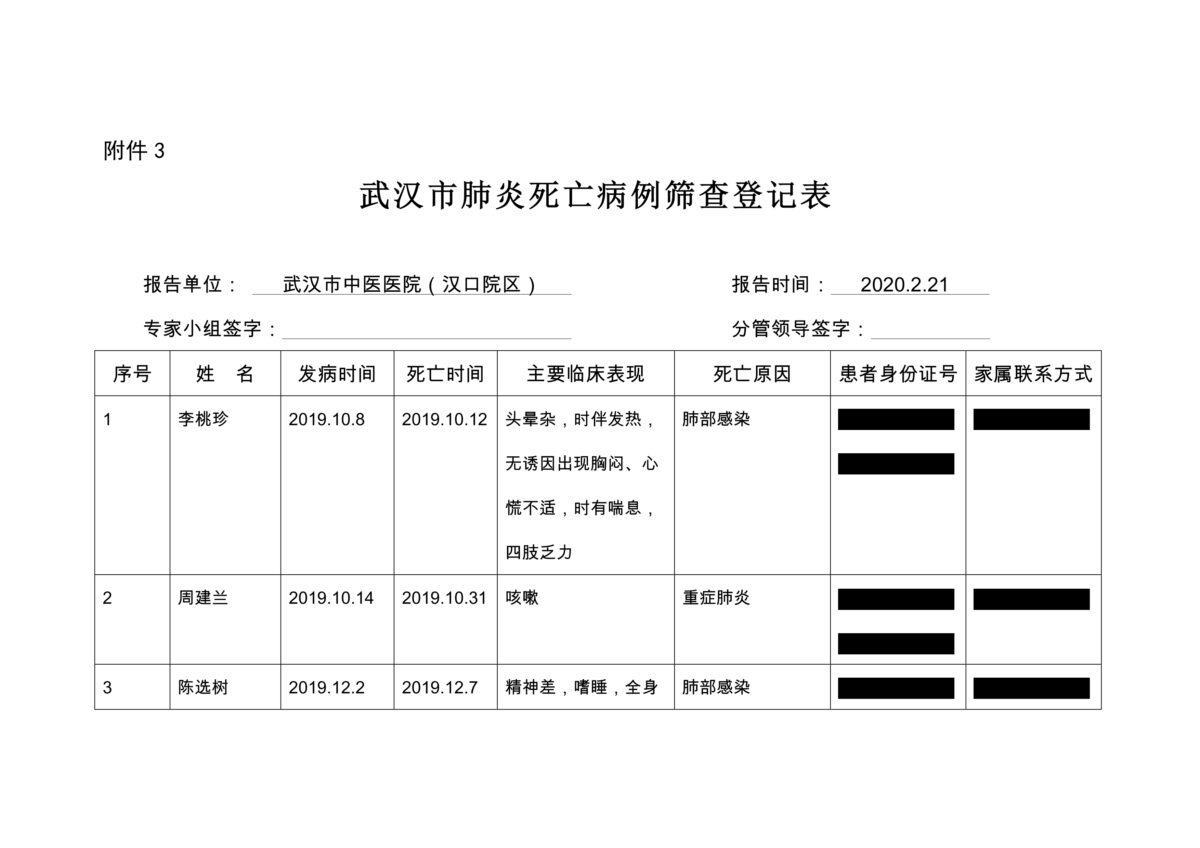 A screenshot of a leaked document showing details about patients who died of COVID-like symptoms at Wuhan Hospital of Traditional Chinese Medicine in Wuhan, Hubei Province, China, on Feb. 21, 2020. Part of the information is redacted by The Epoch Times to protect the patients’ privacy. (Provided to The Epoch Times)

The obtained records showed nine deaths due to COVID-19-like conditions at three hospitals.

Five were severe pneumonia patients who died between November and December 2019 at the Wuhan No. 6 Hospital, one of the hospitals named in the inquiry letter. The Wuhan Hospital of Traditional Chinese Medicine, a tertiary hospital, had three deaths in October. Wuhan No. 8 Hospital recorded one death. 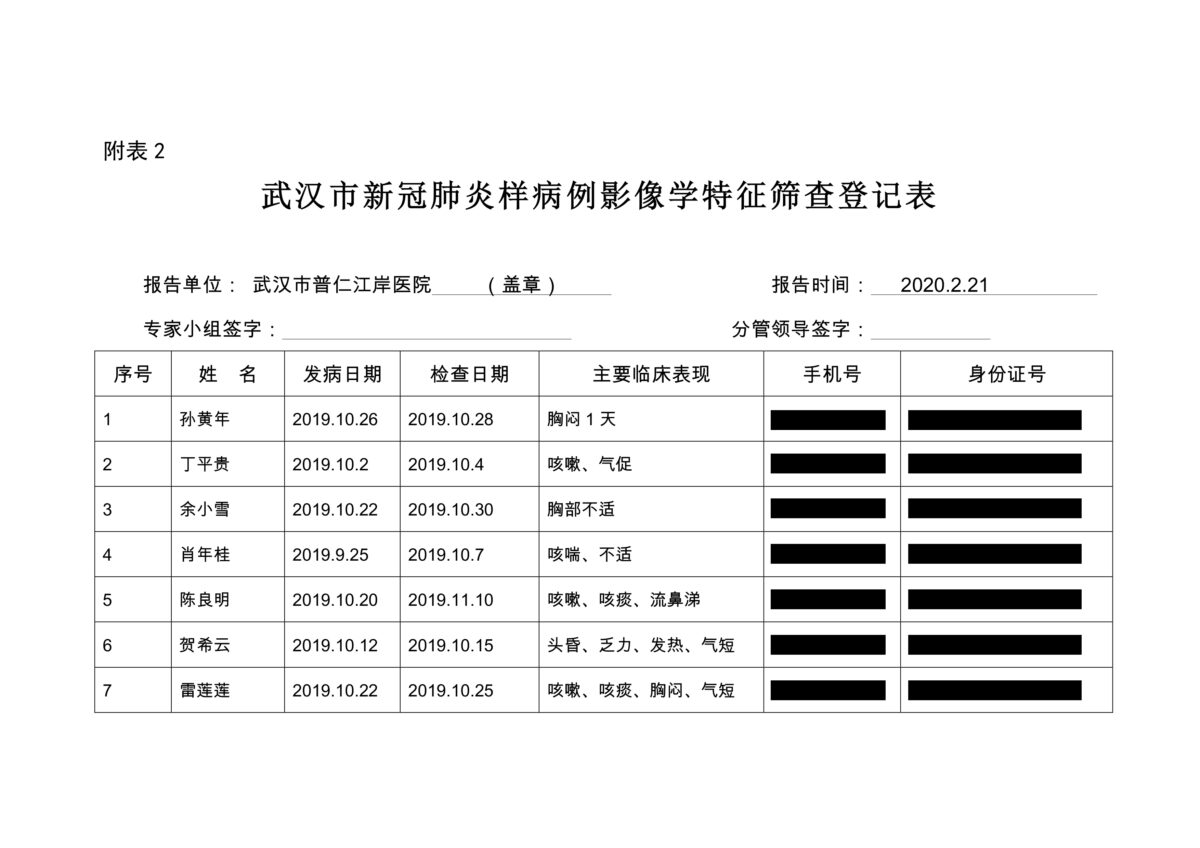 Screenshot of a leaked document showing details of patients with COVID-like symptoms at Wuhan Puren Jiangan Hospital, on Feb. 21, 2020. Part of the information is redacted by The Epoch Times to protect the patients’ privacy. (Provided to The Epoch Times)

Screenshot of a leaked document showing details of a patient with COVID-like symptoms at Wuhan No. 6 Hospital, on Feb. 21, 2020. Part of the information is redacted by The Epoch Times to protect the patients’ privacy. (Provided to The Epoch Times)

Wuhan has 205 health facilities at the community and township level and 66 designated hospitals for treating COVID-19 patients, city officials said in March.

China’s lack of transparency has been heavily criticized by government officials. It consistently refused to allow in experts from the United States and the World Health Organization (WHO) to study the outbreak in the country. On Feb. 12, an official from the U.S. Centers for Disease Control and Prevention said the agency was still unable to access “direct data” about the outbreak and “continue to be hopeful that we’ll be invited to do that.”

In a media interview released on May 1, a WHO representative in China also said China has excluded the organization’s experts from the country’s virus probe.

Nicole Hao contributed to this report.

A previous version of this article incorrectly stated when the first patient shown in the records started receiving medical treatment for COVID-like symptoms. The Epoch Times regrets the error.