COLORADO SPRINGS, Colo. >> The alleged shooter facing possible hate crime charges in the fatal shooting of five people at a Colorado Springs gay nightclub was ordered held without bail in an initial court appearance Wednesday as the suspect sat slumped over in a chair.

Anderson Lee Aldrich, 22, could be seen with injuries visible on their face and head in a brief video appearance from jail. Aldrich appeared to need prompting by defense attorneys and offered a slurred response when asked to state their name by El Paso County Court Judge Charlotte Ankeny.

The suspect was beaten into submission by patrons during Saturday night’s shooting at Club Q and released from the hospital Tuesday. The motive in the shooting was still under investigation, but authorities said Aldrich faces possible murder and hate crime charges.

Hate crime charges would require proving that the shooter was motivated by bias, such as against the victims’ actual or perceived sexual orientation or gender identity. The charges against Aldrich are preliminary, and prosecutors have not yet fi led formal charges.

Prosecutor Michael Allen repeatedly referred to the suspect as “he” during a press briefing after the hearing and said the suspect’s gender status would not change anything about the case in his opinion. Allen said Aldrich was “physically competent” to stand charges.

Ankeny set the next hearing for Dec. 6. 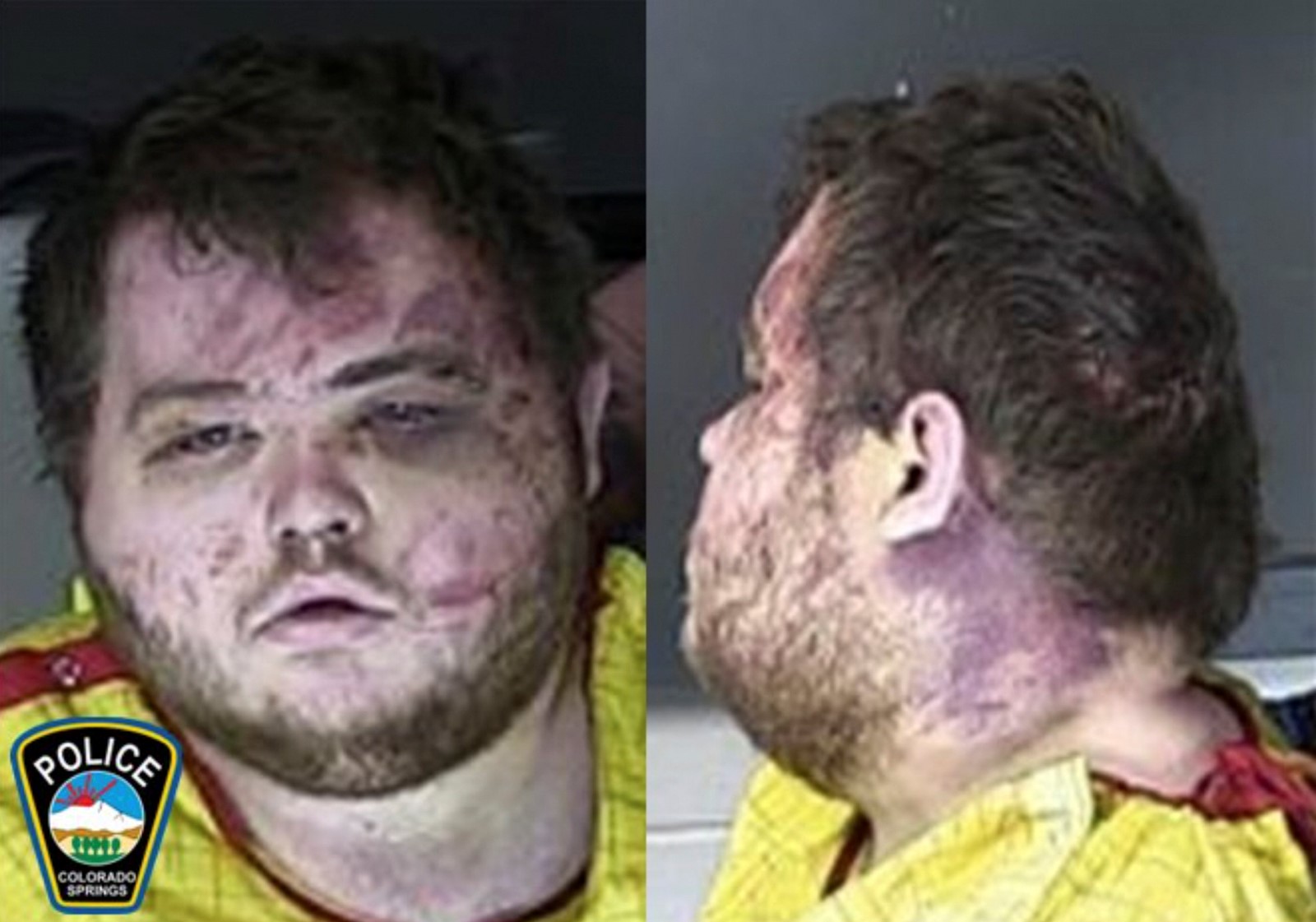 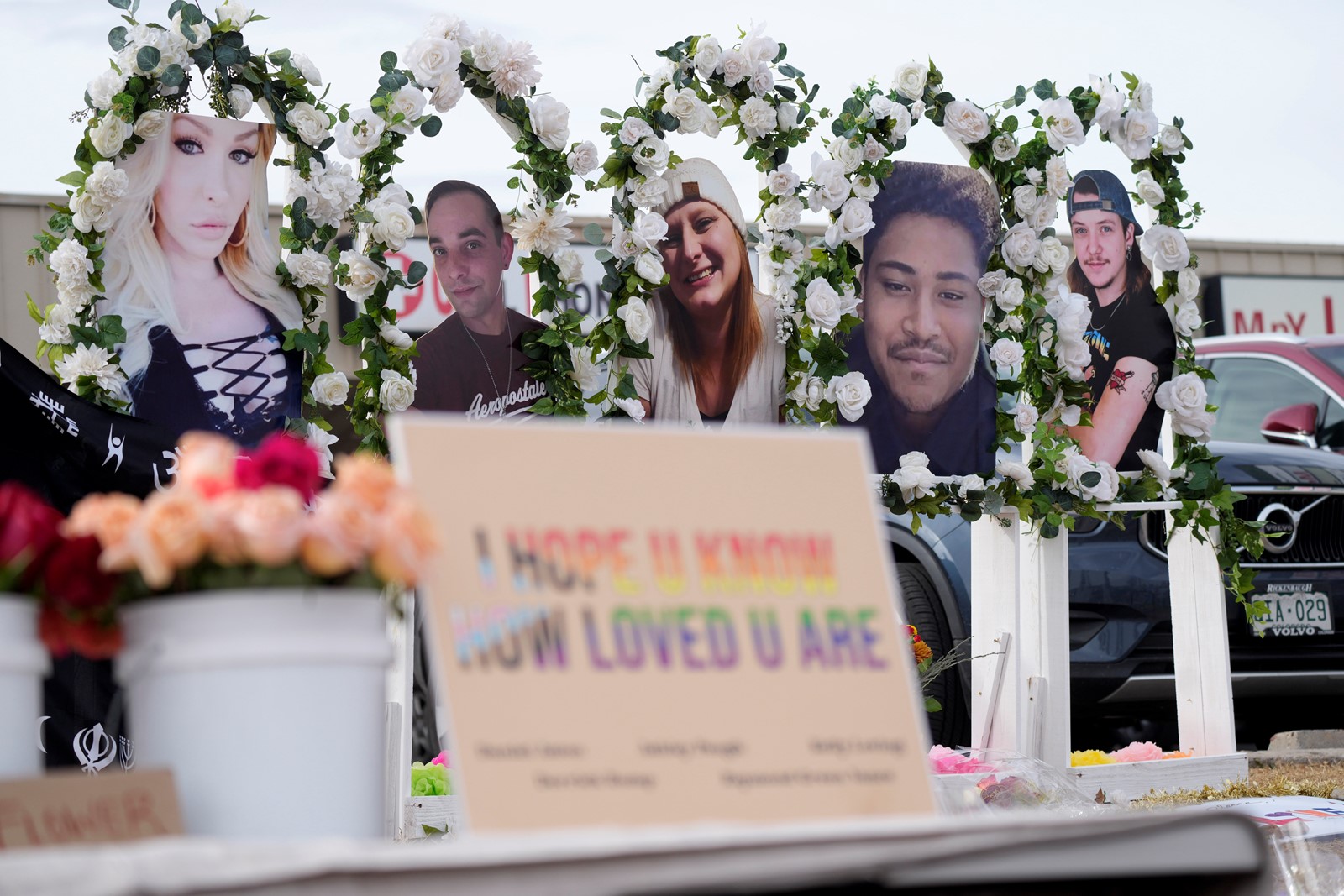 Photographs of the five slain victims of a mass shooting at a gay nightclub at a makeshift memorial for the victims Wednesday in Colorado Springs, Colo. DAVIDZALUBOWSKI — THE ASSOCIATED PRESS

Aldrich’s name was changed more than six years ago as a teenager, after filing a legal petition in Texas seeking to “protect himself” from a father with a criminal history including domestic violence against Aldrich’s mother.

Aldrich was known as Nicholas Franklin Brink until 2016. Weeks before turning 16, Aldrich successfully petitioned a Texas court for a name change, court records show. A petition for the name change was submitted on Brink’s behalf by his legal guardians at the time.

“Minor wishes to protect himself and his future from any connections to birth father and his criminal history. Father has had no contact with minor for several years,” said the petition filed in Bexar County, Texas.

The suspect’s father, Aaron Brink, is a mixed martial arts fighter and pornography performer with an extensive criminal history, including convictions for battery against the alleged shooter’s mother, Laura Voepel, both before and after the suspect was born, state and federal court records show. A 2002 misdemeanor battery conviction in California resulted in a protective order that initially barred Aaron Brink from contacting the suspect or Voepel except through an attorney, but was later modified to allow monitored visits.

Aaron Brink told San Diego media he was shocked to learn about Aldrich’s alleged involvement. He said his first reaction was to question why Aldrich was at a gay bar. Brink said he hadn’t had much contact with his child but had taught them to fight, “praising” Aldrich for violent behavior at an early age.