By VASILISA STEPANENKO AND ANDREW MELDRUM | THE ASSOCIATED PRESS

DNIPRO, Ukraine >> Ukrainian emergency crews on Monday sifted through what was left ofa Dnipro apartment building destroyed by a Russian missile, placing bodies from one of thewar’s deadliest single attacks in months in black bags and gingerly carrying them acrosssteep piles of rubble.

Authorities said the death toll from Saturday’s strike rose to 40 and that 30 people remainedmissing Monday. Tall cranes swung across the jagged gaps in a row of residential towers,the engines growling as residents of one of Ukraine’s largest cities watched largely insilence under a gray sky.

About 1,700 people lived in the multistory building, and search and rescue crews haveworked nonstop since the missile strike to locate victims and survivors in the wreckage. Theregional administration said 39 people have been rescued and at least 75 were wounded.

The reported death toll put it among the deadliest attacks on Ukrainian civilians sincebefore the summer, according to The Associated Press-Frontline War Crimes Watch project.Residents said the apartment tower did not house any military facilities.

Oleksander Anyskevych said he was in his apartment when the missile struck.

“Boom — and that’s it. We saw that we were alive and that’s all,” Anyskevych said Monday ashe went to the site to see his wrecked apartment.

He told The Associated Press that he knew people who died under the rubble. One of hisson’s classmates lost her parents.

Dnipro residents took flowers, candles and toys to the ruins.  “All of us could be in that place,” local resident Iryna Skrypnyk said. 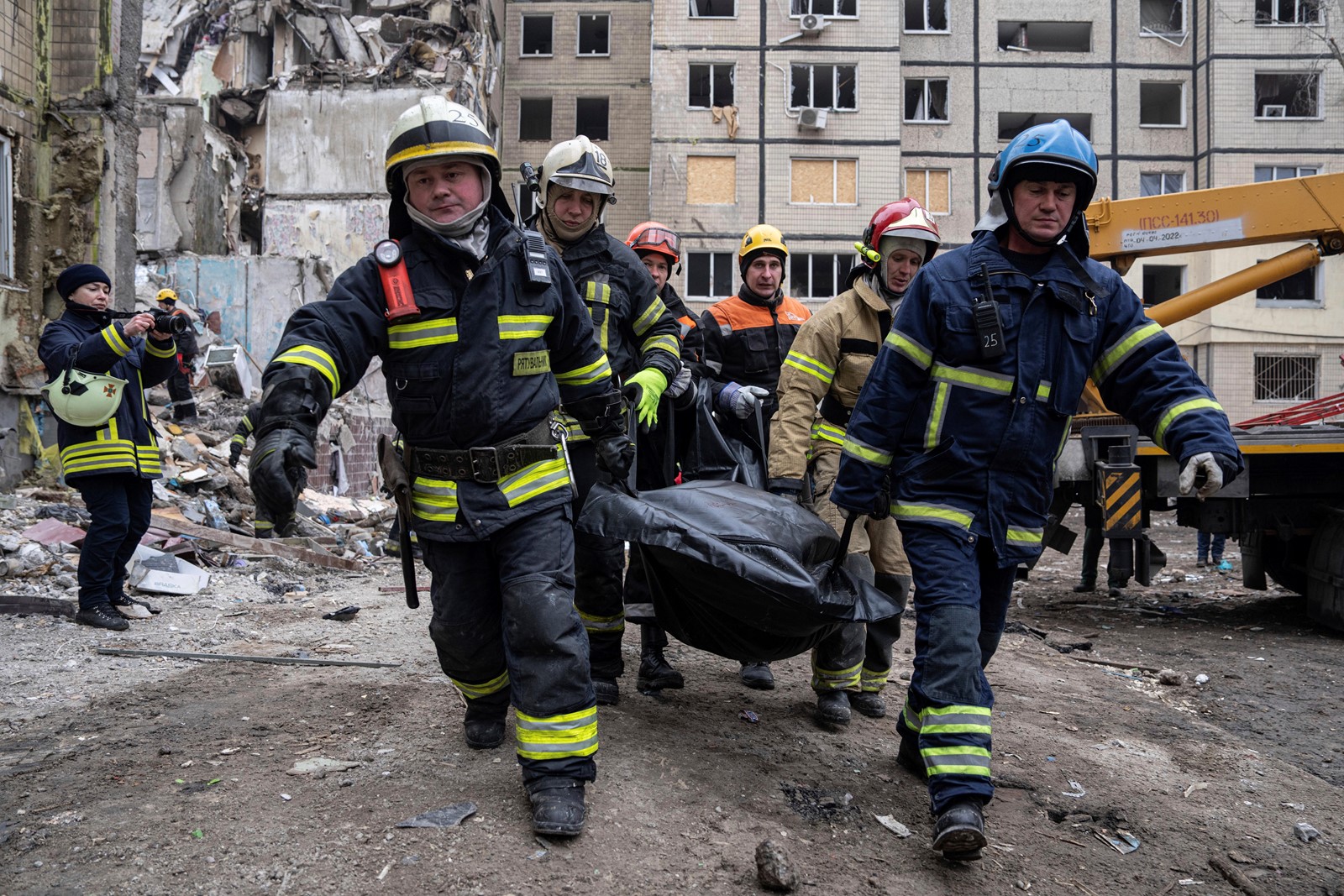 Rescue workers on Monday carry the body of a man who was killed in a Russian missile strike on an apartment building in the southeastern city of Dnipro, Ukraine. EVGENIY MALOLETKA — THE ASSOCIATED PRESS

The European Union’s foreign policy chief, Joseph Borrell, called the strike, and others like it, “inhumane aggression” because it directly targeted civilians. “There will be no impunity for these crimes,” he said in a tweet Sunday.

The strike on the building came amid a wider barrage of Russian cruise missiles acrossUkraine. The Ukrainian military said Sunday that it did not have the means to intercept thetype of Russian missile that hit the residential building in Dnipro.

The Russian and Belarusian air forces began a joint exercise Monday in Belarus, whichborders Ukraine and served as a staging ground for Russia’s Feb. 24 invasion of Ukraine.The drills are set to run through Feb. 1, the Belarusian Defense Ministry said. Russia hassent its warplanes to Belarus for the drills.

The Institute for the Study of War, a Washington think tank, reported signs of the Kremlintaking steps to turn its Ukraine invasion into “a major conventional war” after months ofembarrassing military reversals.

What Moscow calls “a special military operation” aimed to capture the Ukrainian capital, Kyiv, within weeks and to install a Kremlin-friendly regime there, but Russian forces ultimately withdrew from around Kyiv, the think tank said. Then came a successful Ukrainian counteroffensive in recent months before the onset of winter slowed military advances.

“The Kremlin is likely preparing to conduct a decisive strategic action in the next six months intended to regain the initiative and end Ukraine’s current string of operational successes,” the Institute for the Study of War said in a report late Sunday.