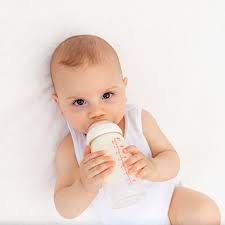 Dear Heloise >> With the nation’s lack of formula, why not go back to what millions of babies were fed before all of these fancy formulas? When I asked my pediatrician about the evaporated milk formula, he told me, “There is nothing wrong with it. Try it if you want.”

I had five children, and the last three were fed this, after my dear mother told me about it. Recently, I asked my friends at the pool, and the majority also used this. Granted, I live in a retirement community, but these gals are all retired nurses. Some were neonatal nurses. It only requires evaporated milk, karo syrup and boiled water.

Ask your pediatrician for the correct amounts of syrup, because it does get lessened gradually, while the water gets increased. I never had a problem with my kids’ switchover to regular milk later on, and I have never known a baby to be allergic to this formula.

Dear Heloise >> This is in reference to the letter from Jane M. in San Antonio. I’m just letting her know, if it is your cell phone that the calls are coming in on, you do not have to listen to the ringing until it stops. Just push the top button on the lefthand side of your phone, and the sound will stop. It keeps ringing for the caller on the other line, but the sound is muted for you.

Dear Heloise >> Good day to you! Recently, you reprinted your War Cake Recipe, and I thought your readers would like an alternate version. Our family calls it the Milkless-Eggless-Butterless cake, or Depression Cake.

Bake in a greased and floured tube pan at 325 degrees Fahrenheit for 50 minutes. I hope you and your readers enjoy.

Dear Heloise >> You can use your bread or roll bags for garbage collection. Just be sure to turn them inside out over your sink to empty all of the crumbs. That way, the printing on the outside doesn’t get on your cupboard, and neither do the crumbs.