By Rodrique Ngowi | The Associated Press 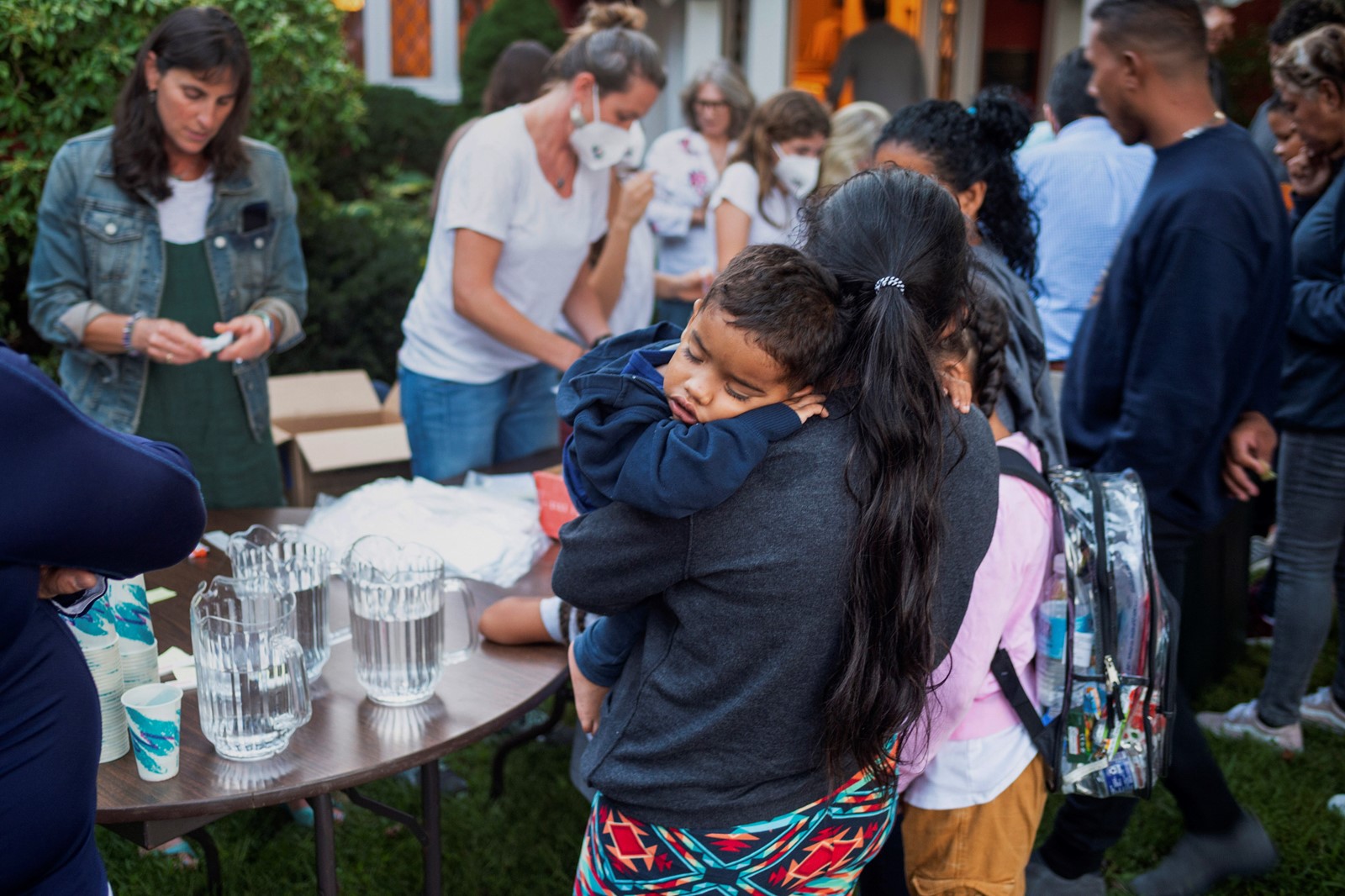 A woman who is part of a group of immigrants that had just arrived on a flight from Florida holds a child as the group is fed outside St. Andrews Episcopal Church on Wednesday in Edgartown, Mass., on Martha’s Vineyard. RAY EWING — VINEYARDGAZETTE FOR THE ASSOCIATED PRESS

EDGARTOWN, Mass. >> Republican governors are escalating their partisan tactic of sending migrants to Democratic strongholds without advance warning, including a wealthy summer enclave in Massachusetts and the home of Vice President Kamala Harris, to taunt leaders of immigrant-friendly “sanctuary” cities and stoke opposition to Joe Biden administration border policies.

The governors of Texas and Arizona have sent thousands of migrants on buses to New York, Chicago and Washington, D.C., in recent months. But the latest surprise moves — which included two flights to Martha’s Vineyard Wednesday paid for by Florida — reached a new level of political theater that critics derided as inhumane.

Upon arrival in Martha’s Vineyard, where former President Barack Obama has a home, the migrants who are predominantly from Venezuela were provided with meals, shelter, healthcare and information about where to find work.

The vacation island south of Boston, whose year-round residents include many blue-collar workers, appeared to absorb the dozens of arrivals without a major hitch.

Elizabeth Folcarelli, chief executive of the nonprofit Martha’s Vineyard Community Services, was wrapping up work when she saw 48 Venezuelans with luggage and backpacks approach her office. They carried red folders with brochures for her organization.

Migrants played soccer and hung out in small groups on the porch of their temporary shelter Thursday while meeting visiting attorneys who gave free advice and other service providers.

Well-wishers dropped off donations, and volunteers signed up to provide whatever help they could offer. There were no signs of protest.

The president of the League of United Latin American Citizens, Domingo Garcia, said that some of the migrants sent on buses from Texas to Washington, D.C. were “tricked” — an allegation that The Associated Press has not confirmed and that officials in Texas and Arizona have denied.

Florida Gov. Ron DeSantis said the flights to Martha’s Vineyard were part of an effort to “transport illegal immigrants to sanctuary destinations.” The Florida Legislature has earmarked $12 million to transport “unauthorized aliens” out of state.

DeSantis’ office didn’t answer questions about where migrants boarded planes and how they were coaxed into making the trip.

Massachusetts state Sen. Julian Cyr told The Vineyard Gazette that one plane originated in San Antonio, raising questions about whether migrants ever set foot in Florida. Flight tracking data shows a flight originated in San Antonio, stopped in Crestview, Florida, and Charlotte, North Carolina, before landing in Martha’s Vineyard. The two buses of migrants from Texas that arrived early Thursday outside Harris’ residence at the U.S. Naval Observatory carried more than 100 migrants from Colombia, Cuba, Guyana, Nicaragua, Panama and Venezuela.