The consumer price index unexpectedly climbed 8.3% in August, despite a decline in gas prices.

Inflation rose more than expected in August, continuing to create severe financial pressure for U.S. households even as the cost of gasoline fell.

The Labor Department said Tuesday that the consumer price index, a broad measure of the price for everyday goods including gasoline, groceries and rents, rose 8.3% in August from a year ago. Prices climbed 0.1% in the one-month period from July.

Those figures were both higher than the 8.1% headline figure and 0.1% monthly decline forecast by Refinitiv economists, likely a worrisome sign for the Federal Reserve as it seeks to cool price gains and tame consumer demand. Stock futures tanked on the surprisingly hot report, with the Dow Jones Industrial Average down more than 400 points on fears of an increasingly aggressive Fed.

So-called core prices, which strip out the more volatile measurements of food and energy, climbed 6.3% from the previous year, above the 6.1% forecast from economists. Core prices also rose more than expected on a monthly basis, jumping 0.6% in August – a bigger increase than in April, May, June and July, and a troubling sign that underlying inflationary pressures in the economy remain strong.

Scorching-hot inflation has created severe financial pressures for most U.S. households, which are forced to pay more everyday necessities like food and rent. The burden is disproportionately borne by low-income Americans, whose already-stretched paychecks are heavily impacted by price fluctuations.

"Today's higher-than-expected CPI reading shows that we still have a long way to go before inflation returns to more normal levels," said Scott Brave, the lead consumer spending economist at Morning Consult. "While the recent decline in gas prices has provided a welcome reprieve for consumers, it represents just one part of the larger consumer basket, and prices for much of that basket continue to increase at rates that far exceed incomes."

Fueling the price spikes are several issues related to the COVID-19 pandemic and the rousing economic rebound from the worst downturn in nearly a century. In the wake of lockdown orders that saw a broad swath of the country shuttered, the economy staged a stunning comeback, powered by unprecedented government spending, emergency steps by the Fed, and the widespread distribution of vaccines.

As Americans — flush with stimulus cash — ventured out to shop, eat and travel, businesses struggled to meet the demand, reporting difficulties in onboarding new employees and buying enough supplies to satisfy the need. To attract new talent, many businesses hiked wages — but to offset those increases, employers have reported raising the prices of their products.

The matter was complicated by bottlenecks at ports and freight yards and a lack of shipping containers, snarling the global supply chain.

Since early spring, however, the Russian war in Ukraine has further exacerbated the inflation crisis by elevating food and energy prices. Oil and gasoline prices have declined sharply over the summer, although economists have cautioned the situation remains uncertain due to the ongoing conflict in Europe.

The report will also have significant implications for the Federal Reserve, which is tightening monetary policy at the fastest rate in decades as it tries to cool consumer demand and reduce out-of-control inflation. Policymakers approved back-to-back 75-basis point rate hikes in June and July for the first time since 1994 and have confirmed that a similarly sized increase is on the table at the meeting on Sept. 20-21. 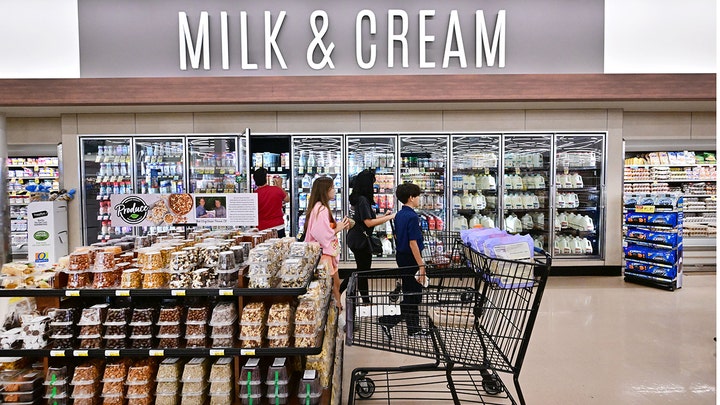 Shoppers walk through the milk and cream section of a supermarket in Montebello, California, on August 23, 2022.  ((Photo by FREDERIC J. BROWN/AFP via Getty Images) / Getty Images).

In a speech last month at the Kansas Fed's annual economic symposium in Jackson Hole, Wyo., Powell reiterated a pledge to continue raising interest rates and hold them at a higher level until price increases are tamed – even if it causes economic "pain."

He stressed that policymakers need to see substantial evidence that inflation has slowed before taking their foot off the brakes.

"While the lower inflation readings for July are welcome, a single month’s improvement falls far short of what the Committee will need to see before we are confident that inflation is moving down," Powell said.

With the August inflation data coming in hotter than expected, the odds of an even steeper rate hike in September and a more aggressive central bank in coming months are much higher.