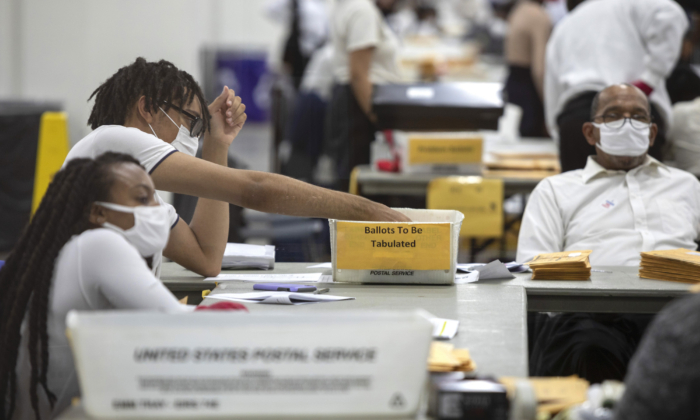 A worker with the Detroit Department of Elections sorts through absentee ballots at the Central Counting Board in the TCF Center in Detroit on Nov. 4, 2020. (Elaine Cromie/Getty Images)

Republicans in Michigan said they are expanding their investigation into Dominion Voting Systems after a county-level counting error switched Republican votes to Democrat last week.

“Our team is currently reaching out to county clerks across Michigan as well as going through election results in each of the counties which use this software to see how widespread this error may be,” Tony Zammit, communications director for the Michigan Republican Party, told the Washington Examiner on Nov. 7.

Michigan Republican Party Chairwoman Laura Cox said in a news conference last week that 47 Michigan counties used software from Dominion in the same manner as Antrim County, where it was found that 6,000 votes were erroneously tabulated to Democratic nominee Joe Biden instead of President Donald Trump.

Michigan’s secretary of state office didn’t immediately respond to a request by The Epoch Times for comment regarding Cox’s claims.

“In Antrim County, ballots were counted for Democrats that were meant for Republicans, causing a 6,000-vote swing against our candidates,” Cox said. “The county clerk came forward and said tabulating software glitched and caused a miscalculation of the votes.”

Cox added that the state’s GOP found that 47 of 83 counties use the same software.  “Antrim County had to hand count all of the ballots,” Cox said. “Counties that use this software need to closely examine their results for similar discrepancies.”

Dominion, in a statement to news outlets over the weekend, said that it has received no “credible reports” of software errors in Michigan or Georgia.

“There are no credible reports or evidence of any system software errors in Georgia or Michigan, including erroneous reporting of unofficial results from Antrim County, Michigan,” the company said.

“The erroneous reporting of unofficial results from Antrim county was a result of accidental error on the part of the Antrim County Clerk,” she said. “The equipment and software did not malfunction and all ballots were properly tabulated. However, the clerk accidentally did not update the software used to collect voting machine data and report unofficial results.

“Like many counties in Michigan, Antrim County uses the Dominion Voting Systems election management system and voting machines (ballot tabulators). The county receives programming support from Election Source.Tabulators are programmed to scan hand-marked paper ballots. When machines are finished scanning the ballots, the paper ballots are retained and a totals tape showing the number of votes for each candidate in each race is printed from the machine.”

The software, she added, didn’t “cause a misallocation of votes,” blaming it on “human error.”

“As with other unofficial results reporting errors, this was an honest mistake and did not affect any actual vote totals. Election clerks work extremely hard and do their work with integrity. They are human beings, and sometimes make mistakes. However, there are many checks and balances that ensure mistakes can be caught and corrected,” she said.

Meanwhile, Michigan state lawmakers on Nov. 7 issued a subpoena to state election officials amid the allegations of voter fraud and software glitches.

Dominion Voting Systems’ software was used in several other states.

Nevada Republicans also say they have questions about the software being used in the state.

“What does this mean for Nevada? We need answers,” the Nevada Republican Party said in a Twitter post on Nov. 6, responding to a statement about Dominion being used in the state.

Rep. Paul Gosar (R-Ariz.) told The Epoch Times: “If there is a glitch that’s built into the software system, it’ll be shown and it’s easy to define that.

“I think this is a great exercise to get back the trust of the American people.”