Ocasio-Cortez Says She May Quit Politics, Criticizes ‘Hostile’ Democrats Over Lack of Support 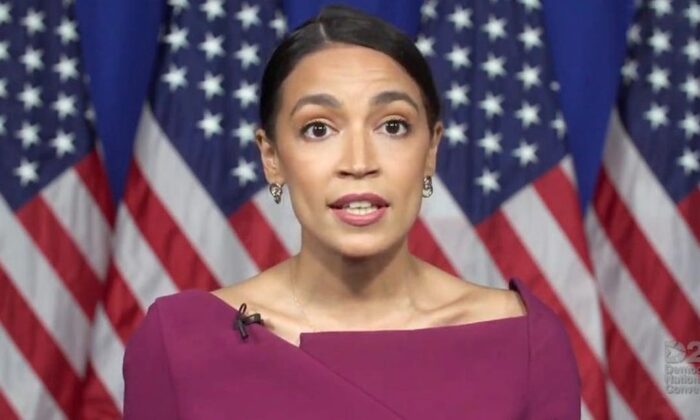 Rep. Alexandria Ocasio-Cortez (D-N.Y.) suggested in a new interview that she might quit politics if Democrats don’t align with the causes she supports.

Speaking to the New York Times, the freshman Democratic socialist who won her reelection, said she was considering not running this year.

Ocasio-Cortez said that “stress,” “violence,” and a “lack of support” from the Democratic Party are among the reasons why she would possibly leave politics.

“Externally, there’s been a ton of support, but internally, it’s been extremely hostile to anything that even smells progressive,” she griped to the paper.

Over the weekend, some Democratic lawmakers issued a rebuke to socialist messaging and proposals, saying it cost Democrats elections on Nov. 3.

Among them was Sen. Joe Manchin (D-W.Va.), who told CBS News on Sunday: “We’re not for the New Green Deal, we’re not for the things [President Donald Trump] has talked about, Medicare for All. We can’t even pay for Medicare for some.”He added, “Basically labeling every Democrat as a socialist or supporting socialism, that’s not who we are. It’s not who I am is not how we were raised. And it hurt a lot of good Democrats in rural America, Montana, for one. Other places around the country.”

Rep. Abigail Spanberger (D-Va.) has also claimed that her slim margin of reelection was due to leftist politicians in the Democratic Party. In a leaked call to the press, Spanberger blamed the Black Lives Matter call of “defund the police” for her near-loss.

“I think that the Democratic party needs to clearly push that we are not supportive of ideas like socialism or defunding the police or anti-Semitism,” noted Rep. Stephanie Murphy (D-Fla.), a co-chair of the House’s centrist Blue Dog Coalition, according to The Associated Press.

This week, Ocasio-Cortez faced widespread backlash for writing on Twitter that she wanted to create an archive of online postings by “Trump sycophants”
Support an independent outlet at a time when it's hard to find factual news.
“Is anyone archiving these Trump sycophants for when they try to downplay or deny their complicity in the future?” Ocasio-Cortez wrote on Nov. 6. “I foresee decent probability of many deleted Tweets, writings, photos in the future,” the lawmaker wrote.

A number of people on the social media website compared her to 20th-century dictators like Joseph Stalin of the Soviet Union, Mao Zedong of the Chinese Communist Party, or Adolf Hitler for the list suggestion.