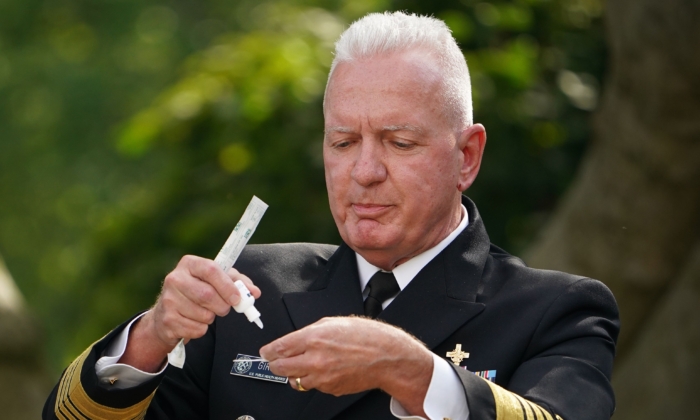 Admiral Brett Giroir, MD, assistant secretary for Health, United States Department of Health and Human Services demonstrates using a self test kit as he speaks on Covid-19 testing in the Rose Garden of the White House on Sept. 28, 2020. (Mandel Ngan/AFP via Getty Images)

By Ivan Pentchoukov | The Epoch Times

President Donald Trump announced on Sept. 28 that the U.S. government will start distributing 150 million rapid COVID-19 tests to states this week in a bid to help governors safely reopen K–12 schools and economies.

Of the total, the administration is dedicating 100 million tests for schools and measures to help reopen economies. An additional 50 million tests will target the most vulnerable elderly population in nursing homes, assisted living facilities, and home health and hospice sites.

“This continues our critical effort to use testing to protect high-risk communities,” Trump said.

The administration has already shipped 2.1 million of the new tests to nursing homes, and more than 900,000 tests to assisted living facilities, Adm. Brett Giroir, the administration’s lead on testing, said during the White House announcement. Long-term care facilities account for a sliver of the U.S. population but more than 40 percent of deaths from the CCP virus.

The new tests, once produced and delivered, will allow the United States to more than double the 111 million tests it has already performed to screen for the CCP (Chinese Communist Party) virus, commonly known as the novel coronavirus.

There are no restrictions on how the 100 million tests meant for schools and economies can be used, but the Trump administration will urge governors to prioritize for settings that need rapid, low-tech methods of testing, such as schools, first-responder facilities, and areas where outbreaks are detected, Giroir said. The administration plans to ship 6.5 million tests from the school allotment this week.

“We just completed a briefing to the governors and their state health officials from the Situation Room, and we heard words like ‘gamechanger’ for their states,” Giroir told the president.

The administration is focusing the testing resources on schools in order to promote the physical, social, and emotional development of children. The rapid tests, manufactured by Abbott Laboratories, would allow teachers, for example, to be tested on a regular basis. The tests could also be made available to parents concerned about a child who has symptoms or to schools for baseline surveillance, such as testing a small group of students every week or every month to ensure the infection levels are low.

The president announced the move at a time when the United States is experiencing an elevated number of new COVID-19 cases per day and, on average, per week. Some experts have suggested the nation may face a surge of infections as the weather gets colder in the fall and winter months ahead.

Trump’s announcement arrived one day prior to the first presidential debate and five weeks prior to the election in November. The campaign of former Vice President Joe Biden targeted the president’s handling of the pandemic as its main line of attack. With the exception of a federal mask mandate, on which the Democrat presidential nominee has pulled back, Biden’s plan for handling the outbreak differs little from what the Trump administration has already put in motion.

The Trump administration previously ordered 150 million rapid tests from Abbot. The tests don’t require specialty equipment to process, are about the size of a credit card, and deliver results in about 15 minutes.

Broad access to testing is part of both federal and state reopening plans. After initial setbacks with a government-made test, several private sector companies developed a variety of testing solutions. The United States leads the world in the number tests performed. The nation is on track to soon have the capacity to run 3 million tests per day, on average, Giroir told Congress last week. The United States is now averaging about 920,000 tests per day, Giroir said at a press conference at the White House on Sept. 28.

More than 200,000 deaths have been reported from patients testing positive for COVID-19 in the United States since the beginning of the outbreak.

Trump has for months urged state and local leaders to open schools this fall. The president frequently speaks about the lockdowns and closed schools at campaign rallies. He has on more than one occasion suggested that the lockdowns are a political maneuver by the Democrats who seek to boost Biden’s election chances by smothering the economy.

“It’s a shame what’s going on,” Trump told a crowd of supporters in North Carolina on Sept 8. “On November 4th, every one of those states will be open. They’re doing it for political reasons.”

Abbott’s test is an important advance because of its low cost and easy-to-use format. Until now, the vast majority of CCP virus tests had to be sent to high-grade medical laboratories for processing that typically took several days. Backlogs led to repeated delays in reporting results, especially during a summer spike in cases.

But rapid, point-of-care tests such as Abbott’s have their own downsides. They’re less accurate, and positive results often need to be confirmed with higher-grade lab tests. Additionally, because the tests are often performed outside the health care system, state officials have said that many tests are going unreported. That could lead to undercounts of new cases, skewing government data for tracking the virus.

“What we’re hearing from the states is that they don’t know where these tests are being done,” said Dr. Jeffrey Engel of the Council of State and Territorial Epidemiologists in a recent interview. He said schools generally don’t have the capacity or expertise to report mass testing results, which could artificially lower infection counts sent to state and federal officials.

The tests from Abbott are being made in two factories, one in Illinois and one in Maine. The company is in a ramping-up phase. One day after the FDA’s approval of the Abbott rapid test, the Trump administration placed an order for 150 million kits. The kits include a nasal swab Trump secured funding for by invoking the Defense Production Act, Giroir said.

It will take the rest of the year to completely fill the order. After that, the administration will decide whether the government should purchase more or whether the free market can determine adequate distribution.