By Hanna Arhirova | The Associated Press

KHERSON, Ukraine >> Residents of Kherson celebrated the end of Russia’s eight-month occupation for the third straight day Sunday, even as they took stock of the extensive damage left behind in the southern Ukrainian city by the Kremlin’s retreating forces.

A jubilant crowd gathered in Kherson’s main square, despite the distant thumps of artillery fire that could be heard as Ukrainian forces pressed on with their effort to push out Moscow’s invasion force.

“It’s a new year for us now,” said Karina Zaikina, 24, who wore on her coat a yellow-and-blue ribbon in Ukraine’s national colors. “For the first time in many months, I wasn’t scared to come into the city.” 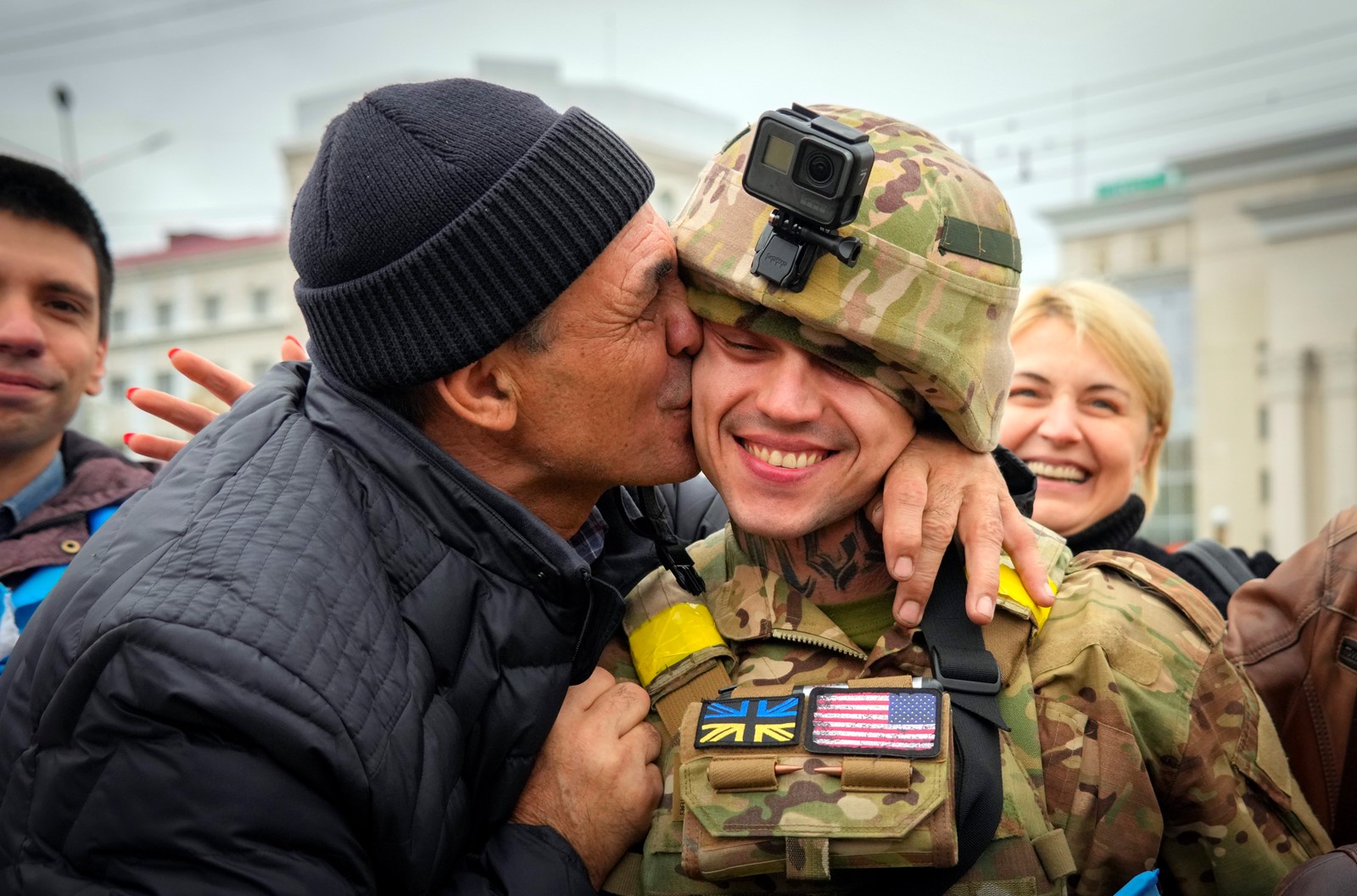 But even as locals rejoiced, the evidence of Russia’s ruthless occupation was all around, and Russian forces still control some 70% of the wider Kherson region.

With cellphone networks knocked out, Zaikina and others lined up to use a satellite phone connection set up for everyone’s use in the square, enabling them to swap news with family and friends for the first time in weeks.

Downtown stores were shuttered. With many people having fl ed the city during the Russian occupation, the city streets were thinly populated. Many of the few people venturing out Sunday carried yellow and blue flags. On the square, people lined up to ask soldiers to autograph their flags and rewarded them with hugs. Some wept.

More bleakly, Kherson is also without electricity or running water, and food and medical supplies are short. Residents said Russian troops plundered the city, carting away loot as they withdrew last week. They also wrecked key public infrastructure before retreating across the wide Dnieper River to its east bank. One Ukrainian official described the situation in Kherson as “a humanitarian catastrophe.”

“I don’t understand what kind of people this is. I don’t know why they did it,” said resident Yevhen Teliezhenko, draped in a Ukrainian flag.

Still, he said, “it became easier to breathe” once the Russians had gone.  “There is no better holiday than what’s happening now,” he declared.

Ukrainian authorities said the demining of critical infrastructure is under way in the city.  Reconnecting the electricity supply is the priority, with gas supplies already assured, Kherson regional governor Yaroslav Yanushevych said.

The Russian pullout marked a triumphant milestone in Ukraine’s pushback against Moscow’s invasion almost nine months ago. In the past two months, Ukraine’s military claimed to have retaken dozens of towns and villages north of the city of Kherson.

Ukrainian President Volodymyr Zelenskyy vowed to keep up the pressure on Russian forces, reassuring the people in Ukrainian cities and villages that are still under occupation.

“We don’t forget anyone; we won’t leave anyone,” he said.

Ukraine’s retaking of Kherson was a significant setback for the Kremlin and the latest in a series of battlefield embarrassments. It came some six weeks after Russian President Vladimir Putin annexed the Kherson region and three other provinces in southern and eastern Ukraine — in breach of international law — and declared them Russian territory.

The U.S. embassy in Kyiv tweeted comments Sunday by National Security Adviser Jake Sullivan, who described the turnaround in Kherson as “an extraordinary victory” for Ukraine and “quite a remarkable thing.”

The reversal came despite Putin’s recent partial mobilization of reservists, raising troop numbers by some 300,000. That has been hard for the Russian military to digest.

“Russian military leadership is trying and largely failing to integrate combat forces drawn from many different organizations and of many different types and levels of skill and equipment into a more cohesive fighting force in Ukraine,” commented the Washington-based Institute for the Study of War, a think tank that tracks the conflict

British Defense Secretary Ben Wallace said the Kremlin will be “worried” by the loss of Kherson but warned against underestimating Moscow. “If they need more cannon fodder, that is what they’ll be doing,” he said.

Ukrainian police called on residents to help identify collaborators with Russian forces. Ukrainian police officers returned to the city Saturday, along with public broadcasting services. The national police chief of Ukraine, Ihor Klymenko, said about 200 officers were at work in the city, setting up checkpoints and documenting evidence of possible war crimes.