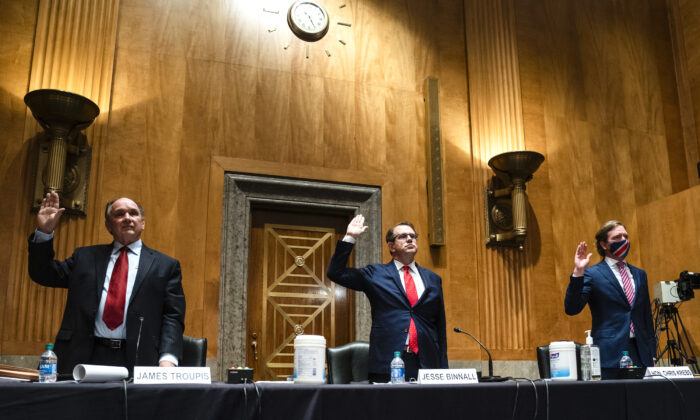 Trump campaign attorneys James R. Troupis (L), and Jesse Binnall (C), and former Cybersecurity and Infrastructure Security Agency Director Chris Krebs (R) are sworn in prior to testifying before a Senate Homeland Security and Governmental Affairs hearing to examine claims of voter irregularities in the 2020 election in the Dirksen Senate Office Building in Washington, on Dec. 16, 2020. (Jim Lo Scalzo-Pool/Getty Images)

“YouTube has decided that my opening statement in the U.S. [Senate], given under oath and based upon hard evidence, is too dangerous for you to see; they removed it. To this day, ‘our evidence has never been refuted, only ignored.’ Why is Google so afraid of the truth? #BigBrother,” lawyer Jesse Binnall wrote on Twitter.

Another video of his testimony at the hearing, uploaded on Dec. 17 by a separate account, appeared to still be up.

Earlier this month, YouTube announced it would remove “content alleging widespread fraud or errors changed the outcome of a historical U.S. presidential election.” The Google-owned company said that it was because the “safe harbor” deadline on Dec. 8 in the presidential election had passed.

There are still outstanding legal challenges regarding the Nov. 3 election, while dueling slates of electors voted for Trump during the Dec. 14 meeting of the Electoral College.

“For example, we will remove videos claiming that a presidential candidate won the election due to widespread software glitches or counting errors. We will begin enforcing this policy today, and will ramp up in the weeks to come,” YouTube wrote. “As always, news coverage and commentary on these issues can remain on our site if there’s sufficient education, documentary, scientific, or artistic context.”

It did not elaborate on the context it requires, and the announcement drew widespread condemnation from conservatives and free speech advocates. They argued that YouTube’s decision was tantamount to censorship of dissenting views.

During the hearing, Binnall, who filed lawsuits on behalf of Trump in Nevada, asserted that the election was riddled with fraud in the Silver State.

“Thousands upon thousands of Nevada voters had their voices canceled out by election fraud and invalid ballots,” he told senators during the hearing. “Here is how it happened. On August 3rd, 2020, after a rushed special session, Nevada legislators made drastic changes to the state’s election law by adopting a bill known as AB4,” he said, referring to the state law that relaxed restrictions on mail-in ballots.

Binnall also said that the campaign was denied transparency when they attempted to seek audits of voting machines or ballots.

As they probed the alleged irregularities, Binnall told the hearing they were refused access by state election officials to the code of voting machines for a forensic review or whether “they were hooked up to the internet.” He asserted, “We weren’t allowed near them … we weren’t allowed a forensic audit.”

“We were denied [transparency] at every single turn” in Nevada, he said, adding that one Nevada official “locked himself in his office” and wouldn’t open the door when Trump’s lawyers tried to serve him a subpoena.